I have a special interest in dwarf conifers. They are evergreen and so provide year round interest, and because they are dwarf they will fit into small spaces and I can have a lot of them. They grow slowly and I can appreciate their form, texture, shape and color close up on a fine scale for many years. Gradually I build up a special rapport with them and they are almost like friends. Their steady presence in the garden and interesting appearance are a pleasure and comfort at all times.

I have five favorite blue dwarf conifers in my collection right now. Why blue? The blue of confers is unique; it blends into green and also has a touch of silver that makes it almost sparkle. It is an easy color to work with and they look well with each other as well as with different colored plants. I grow three together in a group but place the other two with other conifers of a different color. The possibilities are limitless.

Here are my picks for blue dwarf conifers: 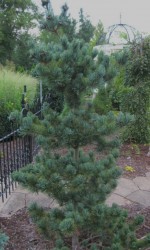 This is an unusual looking plant with its short bluish-green to gray needles and large brown cones that seem to hang from its branches for ever. It makes a beautiful speciman tree or can be used for bonsai or in a container. It grows to 6- 10’ tall and 3-5’ tall in 10 years and the head gardener doesn’t think it is really a dwarf. Decide for yourself. Hardy in zones 4-9 and heat tolerant in AHS zones 1-9.

There is nothing sad about ‘Fellin’ Blue’ deodora cedar.  It is not only dwarf it is spreading (to 6’) and never grows taller than 2’. The trailing branches with their bluish green needles look spectacular tumblilng over rocks by a pond. It can be used in containers for several years before it gets too big and must be transplanted into the garden. Hardy in zones 7-9, heat tolerant in AHS zones 6-9

This one is the bluest of all my blue dwarf conifers. Actually, I have three of them growing together and the blue color of all three is outstanding all year. They grow slowly reaching a spread of 2-4’ in 10 years and a height of 2-3’ tall. Their loosely domed shaped form mixes well with alpines and heathers and looks great at the edge of the border either alone or in a group. The blue color is a real asset next to yellow or red brick paving. Hardy in zones 4-8 and heat tolerant in AHS zones 1-5.

This conifer is upright, dense, cone shaped, and grows about 6-8” a year to a maximum of 10′. The new growth is cream colored and looks especially attractive with the soft silvery blue older growth, almost like snow. The plant looks well as a focal point, in a rock garden or with other dwarf plants. Hardy in zones 4-8 and heat tolerant in AHS zones 1-7.

There is some controversy concerning the correct name of this plant and you may find Picea pungens ‘St (or Saint) Mary’s’. ‘Broom’ refers to the way this cultivar developed and according to some experts has no place in its name. The choice of St. or Saint is also argued but everyone agrees that this cultivar was first found at Saint Mary’s convent in New Jersey. Enough of that. One thing is for sure, this is one gorgeous plant!  It has a fantastic blue color, dense needles and a bun shape. It grows very slowly, about 4”/year, and has no tendency to develop a leader. In 10 years it will grow only 30” tall and 4’ wide. It is a very desirable plant for a rock garden but may be difficult to find. Hardy in zones 2-9 but does better in 4-7.

These dwarf conifers are easy to care for. They prefer full sun, well drained slightly acidic soil but Chamaecyparis tolerates some shade and Picea pungens tolerates drought and alkaline soils better than others. When planting these conifers be sure to water weekly if you have not had at least 1” of rain. This requirement is the same for any tree or shrub you introduce into your garden. As the plants mature they may develop the same pests and problems that any conifer has so watch for potential problems and act quickly.