A weeping willow tree planted beside a pond inspired Monet’s picture and still holds the attention of the thousands of tourists who visit Monet’s garden at Giverny. Water features can be a great asset to a garden but if large, like a pond or stream, needs plants that can tolerate more moisture that most other plants, including occasional flooding.  Weeping willows are beautiful, graceful trees but may not be appropriate .  Fortunately, there are numerous other trees that thrive in these moist to wet soils and are useful additions growing along the edge of a pond, stream or other water feature. 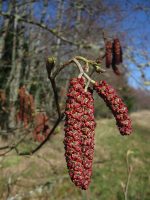 Red alder is a deciduous tree native to North America from southeast Alaska south to central coastal California with an extension inland across Washington and Oregon into northermost Montana.  The trees generally grow 40-50′ tall and have smooth, light gray bark that is often covered with lichens and moss.  The oval to rhombic dull green leaves are  3-6″, have bluntly toothed edges that are curled under and turn yellow in the fall.  In early spring male and female flowers appear in pendent reddish catkins on the same plant.  The male catkins are produced at the tips of the branches and are longer than the female catkins that are positioned right below them.  The female catkins are erect during the period that the flowers are open.  The dry fruit is barrel-like and sheds seeds with winged margins in late fall and winter.  The trees provide food and cover for wildlife and are useful as a hedge or screen.  They are also valuable for reestablishing woodlands and controlling soil erosion especially along waterways.

A native of low woods, streamsides, and riverbanks in the eastern part of the United States, from southern New England to northern Florida and west to Oklahoma and Kansas, river birch is a idea tree for wet or moist sites in sun to part shade. The upright tree is usually multi-stemmed and grows relatively quickly to 40-60 feet tall. The serrated leaves are shiny and medium green in spring and summer, turning pale yellow in the fall. The exfoliating bark may be cream or have a pinkish tinge at first but darkens to cinnamon brown as the tree matures. River birch can be used as a specimen, a shade tree, or as a hedge if cut back. Although it tolerates compacted soil it will not do well in an alkaline pH. Although it is more resistant to the pests and diseases that afflict other birches it is susceptible to ice damage. In the wild it can live for 60-75 years.

Also known as black tupelo, sour gum and pepperidge, this tall, straight, symmetrical deciduous tree is a native of northeastern United States from Maine to Florida and west to Texas. Large, glossy, leathery leaves are dark green in summer but turn yellow, red, and purple in fall, a breath-taking sight. The flowers that appear in spring are inconspicuous but nectar-rich and are favored by honey bees. The bluish-black berry-like fruits that are produced in fall are an important source of food for many birds and other wildlife. The branching pattern and the dark gray bark produced in blocky ridges are attractive in winter. Black gum  tolerates heavy clay soils, some shade, and pollution. It is a good shade tree in large spaces.

This deciduous tree is native to China, Japan, and Korea where it grows in sunny fluvial plains, river banks, and woodlands. Growing up to  100′ tall, the trees have smooth yellowish bark when young, and gray deeply fissured bark when old.  The heart-shaped leaves have conspicuous downy veins, bluntly toothed margins, and twisted tips,  They are bright green above and white-felted beneath until fall when they turn yellow to orange.  Pendent male and female catkins of inconspicuous flowers appear in late spring on different trees.  The male catkins  are  2-4″ long and have 30-40 stamens.  The female catkins are up to 10″ long and give way in the fall to capsules with fluffy white appendages.  Trees are valued for their tolerance of wet soil.  Numerous hybrids are available.

Native to  deep moist soils of the Caucasus, this suckering deciduous tree grows up to 60′ tall and has  pinnately compound leaves up to 18″ long  with 7-27  glossy dark green leaflets that are 2-5″ long, ovate to lanceolate, and sharply toothed.  The inconspicuous light green flowers appear in male and female catkins on the same tree in late spring.  The male catkins are up to 5″ long while the female catkins are up to 20″ long, are less dense and have red styles.  In  early summer fertilized female flowers produce small green winged nutlets that turn brown in late summer to early fall and often persist into winter.  The trees sucker and can form dense groves. 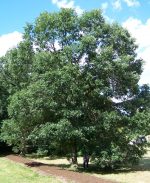 Growing up to 80’ tall, this deciduous tree is native to moist areas in bottomlands and lowland such as riparian soils and the edges of swamps from Massachusetts to Wisconsin, south to Virginia and Missouri.  The trees have brown to grey to brown bark depending on maturity.  The bark becomes scaly and furrowed and may begin to peel with age.  The glossy green leaves are 3-9″ long,  lobed, and have toothed margins and hairy light green or white undersides.  In the fall they turn brown to yellow or red. In spring, elongated pendant cluster of inconspicuous  yellow-green male flowers and green to red female flowers emerge on the same tree.  The fertilized  female flowers give way to shiny brown acorns  that are 1/2 to 3/4″ long with a cap that encloses 1/3-1/2 the acorn.  The acorns mature in 1-2 years and provide food for a variety of wildlife including birds, small mammals, deer, and bear. 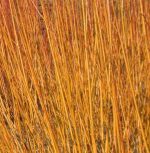 This deciduous tree, often grown as a shrub, has been cultivated in Europe since ancient Roman times and can be found in wet lands, marshes, streambanks, and on the edges of ponds and lakes.  The plants grow up to 70′ tall and have grayish-brown bark that becomes rough and deeply fissured with maturity.  The narrowly-lanceolate finely-toothed  leaves  are up to 4″ long, and are gray-green above, white beneath, and turn yellow in the fall.  Male and female catkins of flowers  appear on different plants in late spring.  The male catkins are 2′ long and have tiny flowers with yellowish anthers.  The female catkins are shorter than the male and have greenish flowers.   The plants are especially valued for their golden stems in winter  and their ability to grow in wet soil.  The best colored stems are achieved by cutting the plants back to 1′ in the winter.  Cultivars vary in stem color and growth form.  Golden willow is a good choice for hedges, screens, winter garden, rain garden, and erosion control.

Also known as Hankow willow, curly willow, dragon’s claw willow and globe willow, this multi stemmed deciduous tree is  native of China and Korea. It is erect when young but spreading as it ages, reaching  up to 30′ tall and 15′ wide. The long twisted branches  and shoots are yellow when young, olive green with maturity, and carry lanceolate contorted leaves that are 2-4″ long, bright green, and have serrated margins.  In late spring inconspicuous yellowish male and female flowers appear in catkins on different trees.  They are not ornamentally valuable and the tree is grown primarily for its branching pattern best enjoyed in winter after the leaves have fallen.  The contortion of the branches can be increased by pollarding.   Plants are short lived so not valued as street trees but do well  and are attractive near water features and provide food for bees and butterflies.  The stems are used in both dried and fresh arrangements.

Also known as laurel willow, this deciduous shrub or small tree is native to northern Europe and northern Asia where it grows along streams, marshes, fens, and wet woods. It grows 30-45′ tall and has broad glossy green leaves that are 1 1⁄2 to 4 1⁄2 ” long and have a sweet aromatic fragrance when dried or bruised.  In late spring male and female catkins of inconspicuous flowers appear.  The male catkins are yellow and showier than the green female catkins. Bay willow is considered one of the showiest of the willows and is valued for its handsome foliage as well as it tolerance of wet soil. 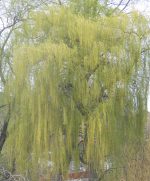 This weeping deciduous tree is a cross between Salix babylonica that provided the weeping habit and  Salix alba ‘Vitellina’  that provided frost hardiness and golden shoots.  The trees grow up to 70′ tall and 50′ wide and have arching branches ending in golden-yellow branchlets.  The glossy green leaves are lanceolate and turn golden yellow in the fall.   Unlike most willows inconspicuous male and female flowers  are usually produced in the same catkins in mid spring.  Golden weeping willow is a very beautiful picturesque tree and looks especially well on the edge of a pond or lake where its reflection can add to the scene. It is very tolerant of urban pollution but is short-lived, messy, and  not suitable for small gardens or planted near buildings because of potentially invasive roots.

Next post: Plants in the Bible: Mediterranean Saltwort (Atriplex halimus)