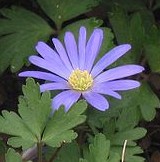 Anemone is a genus of about one-hundred-twenty and belongs to the buttercup, or Ranunculus family. The flower described by Shakespeare in Venus and Adonis may be the Grecian windflower, Anemone blanda. It grows about six to eight inches tall and has a large round tuber, deeply cut fern-like foliage, and dark blue flowers two inches across that bloom in early spring for about two weeks. The flowers lack petals but have showy sepals that appear to be petals. Plants are hardy in USDA zones 4-8 and like dappled shade, and fertile, moist, well-drained soil. They go dormant after blooming.

Another possibility for Shakespeare’s anemone is A. coronaria, the poppy anemone. It is hardy in USDA zones 6-9, is seven to fifteen inches tall, and has finely divided foliage. The flowers have colorful rounded sepals that look like petals and appear in early spring.

In his poem, Venus and Adonis (line 1165), Shakespeare relates the reaction of Venus to Adonis’s’ death as a flower springs from the blood of her beloved.

By this, the boy that by her side lay kill’d
Was melted like a vapour from her sight,
And in his blood that on the ground lay spill’d,
A purple flower sprung up, chequer’d with white,
Resembling well his pale cheeks and the blood
Which in round drops upon their whiteness stood.

The story of Venus and Adonis comes from Greek mythology. According to Ovid, the ancient Roman poet and Shakespeare’s most probably source, Venus warns her lover Adonis against hunting dangerous animal but he ignores her and is killed by a boar. The flower that springs from the blood of Adonis as he dies was the Anemone, also called wind flower, because the wind both opens the blossoms and afterwards blows the petals away. Another interpretation is the anemone sprung from Venus’ tears.

The name, Anemone, is derived from Greek and means “daughter of the wind”. The sixteenth century English herbalist, Gerard, writes about the windflower anemone and describes its tuber, small leaves, and its flower, so we can be fairly sure that Shakespeare knew of it. Since Shakespeare’s time anemones have taken on the meanings of truth, sincerity, abandonment, and expectation.