Genus: Erigeron (Feabane) for the Garden

Erigeron is a genus of approximately 150 species in the aster family, Asteraceae. It includes annuals, biennials, and perennials and most are native to North America. Although the genus includes weeds it also includes some good garden species and extensive breeding programs have resulted in many hybrids and cultivars that are garden worthy. Erigeron bears daisy-like flowerheads on slender leafy stalks above a rosette of fuzzy lanceolate to ovate leaves for a long bloom time in summer. Each flowerhead consists of at least 2 rows of narrow ray flowers and is backed by a bell-shaped involucre of 2 or 3 narrow bracts. The plants do well in average, moist, very well-drained soil in full sun or light shade and are a good choice for rock gardens and native plants gardens along with ornamental grasses, daisies, and coneflowers. Taller species are good cut flowers. The genus name, Erigeron, comes from the Greek words ἦρι (êri)  meaning early referring to the early bloom tme, and  γέρων (gérōn)  meaning old man, referring to the hairy appearance of the fruit that resembles the beard of an old man. Photo Credit Wikipedia

The following species are considered garden worthy but numberous good hybrids and cultivars are also available.

Native to the mountains of Kazakhstan and Xinjian in central Asia, this clump-forming plant grows 9-12″ tall and produces a rosette of 3-4″ long spoon-shaped leaves and sessile ovate upper leaves. All leaves are mid-green and softly hairy. In summer, slender stalks carry solitary, 1.5-2″ wide, semi-double flowerheads with orange, yellow or dark red ray flowers and yellow disc flowers. Orange fleabae is a good choice as a/n edgings or groundcover as well as in a rock garden or native plant garden. Photo Credit Oron Peri Regel

Native to the Cascades and Rocky Mountains of northwestern North America, this fleabane grows 2-8″ tall and producs a rosette of oblong to round, gray-green leaves sometimes with soft hairs, and up to 1/2″ long. An erect stem has smaller, sessile leaves and a single terminal flowerhead 1″ wide with 25-70 golden yellow ray flowers surrounding yellow disc flowers with a green center. The flowerheads are subtended by bracts with pink to purple hairs. It is an excellent choice for growing in crevices, wall gardens and rock gardens. Photo Credit Wikidata

lso known as cutleaf daisy and trifid mountain fleabane, this alpine alpine species is found in western US from the Pacific Coast to the Dakotas, Colorado, and New Mexico where it grows on cliffs rocky slopes and talus, as well as in woodland edges, meadows and plains.  Plants have a stout taproot and spread by rhizomes to form small clumps.  They grow up to 10″ tall and have thick unbranched green or red hairy stems bearing a clump of hairy 2″ long leaves that are finely divided  into linear lobes. The flowerheads are carried singly on almost leafless stems and consist of 20-60 white, pink or blue ray flowers around a center of several dozen yellow disc flowers. Two or three rows of green or purple bracts covered with white hairs surround each flowerhead. Plants are tolerant of drought and salt and are good choice for a rock, alpine, wildflower, seaside or native plant garden. Photo Credit Wikipedia 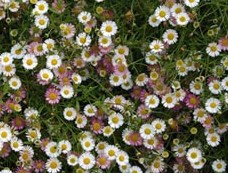 This tender perennial is native to Mexico, Central America, and parts of South America but has naturalized  elsewhere including the west coast of the US. Growing  from a woody rhizome the plant is trailing with a highly branched, wiry stem. The linear to oval leaves are slightly hairy, one inch long, and may be tipped with several teeth. The ¾” wide flowerheads have yellow disc flowers surrounded by white ray flowers that fade to pink at the end of a long bloom time. Plants readily colonize in cracks and crevices of paving or stone walls. Photo Credit Wikipedia 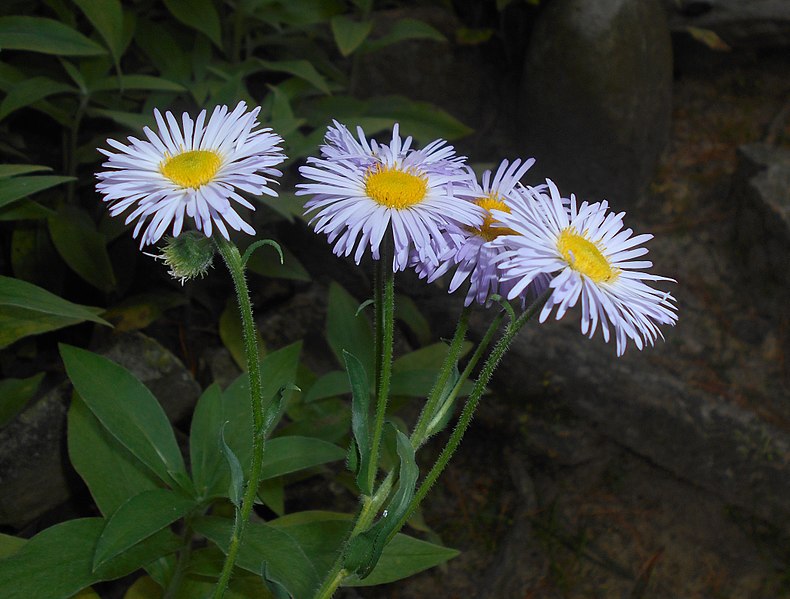 Also known as rose petty, blue spring-daisy, and Robert’s plantian, this biennial or short-lived perennial is native to eastern and south central US from Maine and Ontario to southeast Minnesota south to Florida, Mississippi and Texas where it grows in open woods, fields, streambanks, roadsides and disturbed sites.  Plants grow 18-24″ tall from the crown of a fibrous root system with rhizomes or stolons, and has a rosette of  paddle-shaped hairy leaves up to 5″ long with a single flowering stems.  This stem is hairy, 12-24″ tall, and bears alternate sessile leaves and loose clusters of 2-9 flower heads from mid spring to early summer.   Each flower head is up to 1 1/4″ across and consists of up to 100 white, pink, pale blue or lavender ray flowers surrounding a center of yellow disc flowers. The fruit is a tufted achene. The flowers are attractive to bees and butterflies and the plants are  valued for their use as a ground cover and in rock, cottage, native plant, butterfly, wildlife, and wildflower gardens. 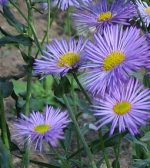 Also called aspen or garden fleabane this native to open woods, prairies, meadows, and roadsides from Alberta and British Columbia, south to the Black Hills, New Mexico, Arizona and Oregon. The plant grows  20-30″ tall from a thick taproot and has multiple flowering stems that are tinged with maroon and bear narrow leaves. The two inch wide flowerheads consist of numerous blue, purple, or rarely white ray flowers surrounding a mass of yellow disc flowers and are important to beneficial insects including bees. Plants are a good choice for the front of a border, as a groundcover, or in a meadow or wildlife garden.  Many hybrids are available. Photo Credit Wikipedia

Next post: Plants of the Bible: Christ’s Thorn (Paliurus spina-Christi)