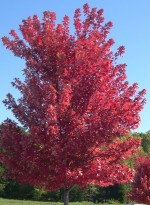 All along the east coast of the U.S. October is the month when people gear up for a beautiful display of autumn leaf color. New England, especially Maine, is the most area famous for the brilliance and beauty of their show but people in the South, Rocky Mountain west, and other areas of the country plan trips as they wait with anticipation for “the peak” week. Here in the Piedmont of North Carolina our local TV news station gives us frequent updates on the progress of leaves and we plan accordingly, perhaps for a mountain jaunt of a couple of days or just a luncheon where we can enjoy the view for a few hours. Either way, leaf peeping is a great way to spend time in the fall.

So, what makes all this splendor possible? Several variables are at work.

1. The kind of tree; some kinds of trees show autumn color and some don’t. Several kinds of maples, aspen, sourwood, and dogwood are known for their outstanding fall color while the leaves of other trees like elms turn brown and fall off unceremoniously. In addition the kind of tree also determines the hue that is produced. Count on a dogwood for red to purple tones but don’t expect orange or yellow. Likewise, expect golden yellow from aspen but not purple or red.

2. Weather; the most vivid coloration will develop when days are warm and sunny and the nights are below 45, but above freezing. Drought can alter the affect of temperature and cause the coloration to be drab or delayed.

3. The health and location of the tree will influence the extent to which any particular tree develops color to its full potential.

The botany of the coloration centers around leaf pigments. The green color of most leaves is due to the presence of the pigment chlorophyll that is all important in food production by the plant. It is present from the time the leaf unfurls in the spring until fall when its content in the leaf declines in response to several factors including decrease light and lower temperatures. Also present in the leaf during this time is a group of pigments called carotenoids that are yellow (xanthophylls) and orange (carotenes). Their colors are covered up by the green of the chlorophyll so you don’t see them until fall when the chlorophyll content of the leaf declines and reveals them.

Another group of pigments called anthocyanins are responsible for the red and purple colors. These pigments are not in the leaf all season but are produced in the fall in response to changing weather conditions. When the temperatures fall the veins in the leaves that carry sugar and nutrients can not carry on their function as before and as a result sugar accumulates in the leaf cells. In the presence of bright light the sugar is broken down so anthocyanin pigments are formed and red and purple tones result. The brighter the light the more anthocyanins are formed. These blend with the yellows and oranges in an infinite numbers of combinations to produce the brilliant autumn color we enjoy.

The occurrence of spectacular autumn coloration is a somewhat special phenomenon and occurs in six area of the world; southern mainland Canada, eastern United States and some smaller areas of the west, Scandinavia, northern and western Europe north of the Alps, the Caucausus near the Black Sea, and Eastern Asia (northern and eastern China, Korea, and Japan).