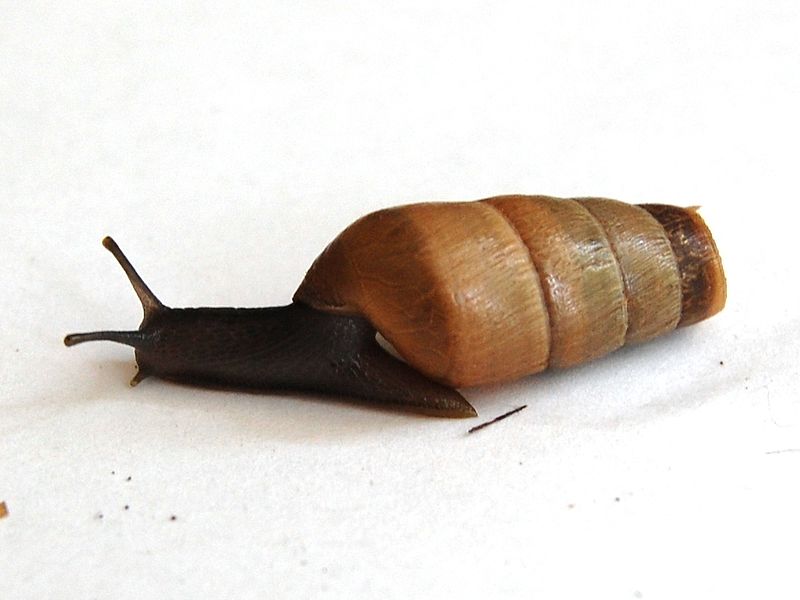 When you see a snail in the garden the immediate reaction is to get rid of it. But stop and take a closer look before you toss out a potential ally. If the snail has a conical shell rather than a circular one it is probably a decollate snail. The decollate snail is a voracious predator of the other garden snails and slugs and can be a great aid to controlling these pests. If you have decollate snails in your garden you are very lucky!

Decollate snails have tapered shells about one inch long. They are known as decollate because they break off the end of their shell by rubbing it against a rough object. This lightens the weight of the shell and is believed to increase mobility and decrease desiccation. Decollate snails are hermaphroditic and both self-fertilization and cross-fertilization occur. Fifteen to fifty eggs are laid in the soil over a three to five day period and a single decollate snail can lay up to 500 eggs per year. Like other snails, decollate snails like cool moist places and live in the soil, coming out at night.  Their preferred diet is the eggs and hatchlings of garden snails but they may nibble on vegetation, especially seedlings, when these are lacking. The plants that the decollate snails eat is usually stressed to the point of death or decay so most healthy established garden plants are not at high risk.

A native of the land around the Mediterranean Sea, decollate snails were imported into California in the 1970s to curb populations of brown garden snails in citrus groves. They have been successful and so far no environmental problems have arisen. Experts are still wary, however, because decollate snails have no known enemies so unforeseen problems may arise. Decollate snails eat a variety of other snails and some states restrict the release of snails in an effort to protect native populations.