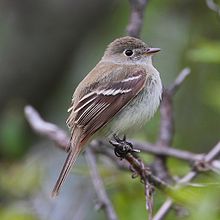 Tyrant flycatchers belong the the family Tyrannidae, the largest of all bird families, and are found through out North and South America. The family includes pewees, phoees, and kingbirds as well as birds we call flycatchers. Most of these birds are plain in appearance, occur in areas where flying insects are found, and are unlikely to be seen in backyards, with a few exceptions such as phoebes, the great crested flycatcher, and the eastern western kingbirds. Tyrant flycatchers depend on insects for food, eating a small amount of fruits and berries, so migrate south when the weather turns cold and the insect population declines. In addition to insects, tyrant flycatchers need a firm perch from which to survey the insect population. They tend to sit on their perch, dart off to snatch an insect, and then return to the perch, repeating this pattern over and over.

Plants for attracting tyrant flycatchers should provide perches as well as food. Any kind of tree or shrub can serve as a perch but those with open branches and sparse foliage are preferred. Manufactured items, however, such as arbors, trellises, tuteurs, and even clothes lines equally successful. Flycatchers eat a great variety of insects including flies, bees, wasps, gnats, butterflies, and moths, so a butterfly garden and vegetable garden offer virtual feasts for them. Some berry producing plants can be included to provide variety to the diet, especially as insects become scarce.

Here are some favorite plants that are sure to attract the flycatchers in your area.

There are several species of milkweeds and all are clump forming herbaceous perennials with attractive fragrant flowers that attract butterflies and other insects. The silk on the seeds provides nesting material. Orioles also like the insects around the flowers, and hummingbirds will come for the nectar.

A native of prairies, meadows and woodland edges, purple coneflower is a herbaceous perennial. It produces pink daisy-like flowers over a long bloom period. Attracts many insects including butterflies and the many birds that eat them.

This herbaceous perennial is native to the United States and is a familiar “weed” along roadsides but many fine goldenrod cultivars have been bred for the garden. Goldenrods bloom late in the season and can attract migratory flycatchers with the host of flying insects that visit the small tightly packed yellow flowers. Other insect eaters such as vireos and warblers may be interested too.

These deciduous small trees or shrubs are multi-stemmed and fast growing. Their large clusters of white flowers in spring give way to clusters of small juicy berries. The berries and insects attracted by the flowers are eaten by flycatchers, and the plant as a whole provides nesting sites. Both the insects around the flowers and the berries attract many other birds including orioles, tanagers, thrushes, wrens, and woodpeckers.

Size: To 15′ H depending on the variety
Site: Sun; moist, well-drained
Hardiness: Zones 3-9

Willow (Salix spp. but not the corkscrew kinds)

There are many different willows varying from deciduous shrubs to medium sized trees. They generally have long thin leaves, colorful twigs in winter, and catkins in very early spring often before the leaves appear. They offer good nest sites and nesting materials to flycatchers and insects to several birds including warblers, orioles, vireos, chickadees, and titmice.