Gardens of Pompeii: Animals in the Garden

The Romans enjoyed animals in the garden just as we do. Birds, dogs, cats, and fish all had a place in Roman life. Evidence for the presence of animals in Pompeian gardens comes from wall paintings, mosaics, sculpture, skeletal remains, castes and the writing of ancient Roman authors. Putting all of this evidence together we can get a reasonably good idea of the role that animals might have played in a garden of ancient Pompeii but we can not know for sure.

Some of the wall paintings that decorated the homes of wealthy Pompeians contain a large number of birds that are so well portrayed that they can be identified. Many are birds that are known to live in the area around Pompeii but others are not native. We don’t know if these birds actually lived in the garden but their existence in wall paintings suggests that they would have been very welcome. One of the most beautiful wall painting showing birds comes from the House of the Golden Bracelet. 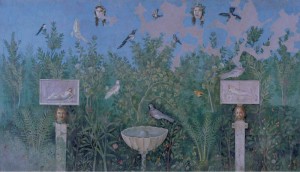 Ten birds are shown, representing eight different genera. One wood pigeon (Columba palumbus) sit by the fountain while another perches on a pinax on top of a herm. Wood pigeons were a symbol of marital fidelity because of their monogamous nature. 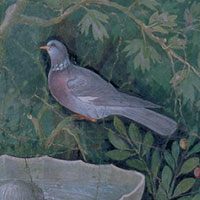 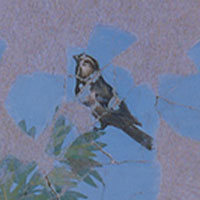 The shy, solitary blue rock thrush (Monticola solitaries) flies downward toward the garden that he probably would not visit in real life because he prefers rocky regions and the seacoast. 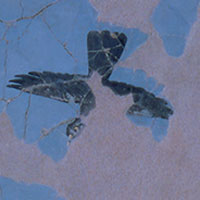 The colorful plumage of the golden oriole (Oriolus oriolus) identifies the bird as being the male of the species. As a fruit eater, golden orioles would not have been considered a good guest in a garden where fruit bearing trees were growing but the bright colored plumage made him a popular bird in wall paintings. 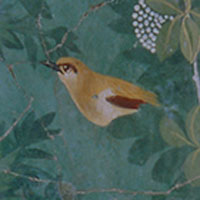 The large blackbilled magpie (Pica pica) was regarded as a sign of trouble but respected for his intellect and reasoning ability. 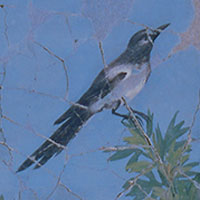 Rock doves (Columba domestica), or common pigeons, were used by the Romans as messengers birds. They were also one of the attributes of Venus and symbols of peace and love. 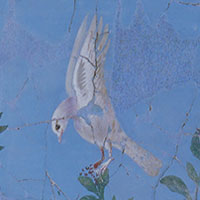 Turtledoves (Streptopelia turtur) were associated with affection and fidelity. They are smaller and slighter than rock doves. 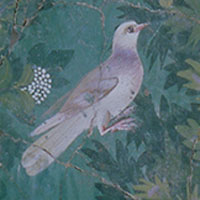 Barnswallows (Hirundo rustica) can be recognized by their deeply forked tail and are generally associated with the coming of spring because they are usually the first migratory bird to start migrating after the winter. They have lived in close association with humans for thousands of years and Virgil remarks in the Georgics that swallows hang their nests from the rafters. Ovid tells the myth of Philomela and Procne, two sisters who where turned into birds, a nightingale and swallow, respectively. 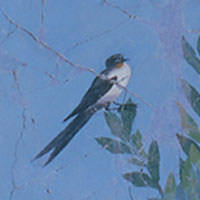 Wall paintings show that the Pompeians could have had bird cages but since they are made of wicker none have survived. We don’t know if the birds in the cages were pets or meant for the table. Peacocks may have been raised in the garden as a status symbol. It was also eaten as a delicacy and used as a watchdog. 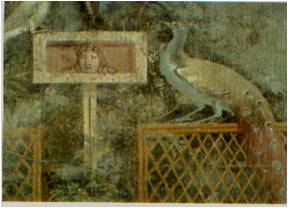 Archaeological evidence indicates that people had pet birds. A commercial aviary and a shop selling terra cotta drinking troughs for birds have been identified and houses in Pompeii have yielded 150 more. Three houses in Pompeii may have had aviaries in their gardens; the columns in the peristyle bear brackets resembling the perches that the ancient author Varro described in his aviary.

Gardens were often the home to the family dog and several are shown in wall paintings.

Bones of both small and large dogs as well as dog houses have been found in Pompeian gardens. 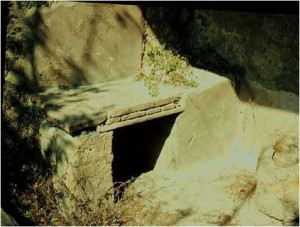 A caste of a dog that was chained in the garden at the time of the eruption gives us proof of the presence of dogs. 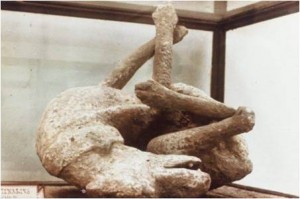 Watchdogs were especially important for families with expensive homes and gardens that produced valuable produce. The ancient author Columella describes the characteristics that a watchdog should have. He mentions ample size, square build, prominent head, a loud sonorous bark, black in color so it could be seen by thieves during the day as a warning but not at night to take advantage of the element of surprise. Dogs fitting this description are shown in mosaics of Pompeian houses. 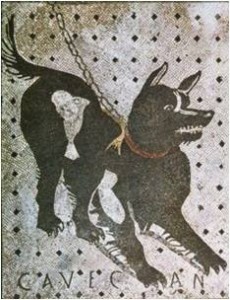 Cats were probably not considered pets but were probably garden residents all the same. Cat bones were found in two gardens and were probably valued as mousers rather than pets. A study of pet names reveals that dogs, race horses, bears, boars, mules, and bulls were given names, but not cats. Just as in modern times, cats were known for their proclivity to kill birds. 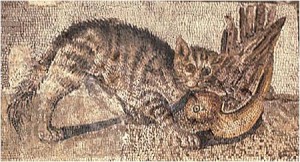 Ribbits are often shown in wall paintings and are kept as pets in Pompeii today. Only one rabbit bone has been found in a garden and it could be the remains of a meal. 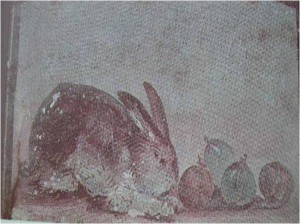 Dormice (Glis glis) were considered a delicacy in ancient Rome and some Pompeians may have raised them for the table in a glirarium set in the garden. The holes allow air movement and a spiral ramp inside allowed the animals to move around.

Fish were raised in garden pools both as pets and for the table. Red mullet, gray mullet and the murena were know to be pets, the most memorable being the murena of Antonia, wife of Drusus, who put earings on her pet murena. Her murena must have been a conger or common eel as they are the only ones that have pectoral fins from which to hang earings. Shelters for fish have been found in the garden pools of Pompeii (under the shelf in the niche). 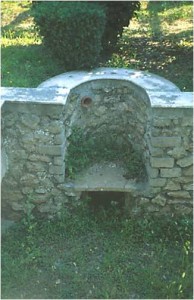 Another pool had amphora on their side to provide breeding chambers for fish. Most Pompeians would have had some animals in their garden. They give life to the garden and add a sense of companionship, qualities that people of all cultures and ages value. Some of the animals such as fish and birds may have served a duel purpose, being kept as both pets and potential food for the table. Others, such as dogs, had a practical purpose in the garden as well as being a pet. Wall paintings and mosaics showing animals indicates how much the Pompeians enjoyed the presence of animals in the garden.