After torrential rains, the weather finally changed and heat and humidity came rolling in with the sun. Temperatures in the high 80’s are expected to lead to 90s in the next week. Great! Many plants will languish and shut down in the heat; others may succumb. The irrigation system is back on and we will probably crank it up and water some of the gardens to cool the plants off. Hopefully, however, the squash, tomatoes, peppers, and eggplants will love it and produce lots of flowers, although the bees will probably stay home to avoid the heat.

This was truly the week of the daylilies! The ones from last week continued and almost all the other kinds started producing flowers.  Last year I decided to revamp the allee where most of the daylilies were growing because the crape myrtle trees had grown from mere whips to substantial trees producing a great amount of shade, too much for most of the daylilies. I gave many away, saving several clumps of all the varieties but reducing the overall number. And then I made the mistake of visiting a daylily nursery and bought more. 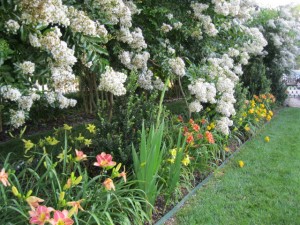 One of the stand outs is ‘Double Dribble’, a double coral pink. 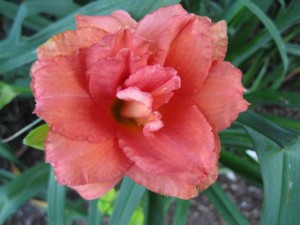 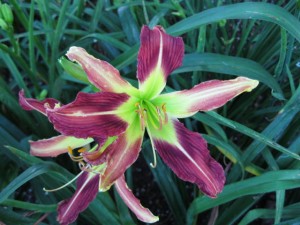 ‘Today’s Charm’, a pale pink with a pink halo. 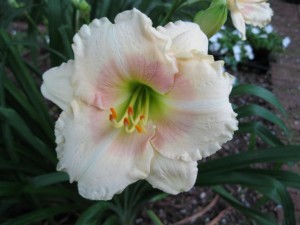 ‘Rags to Riches’ is not only double and ruffled but has striking orange on orange coloration. 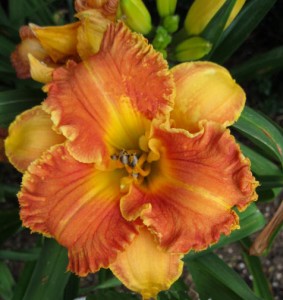 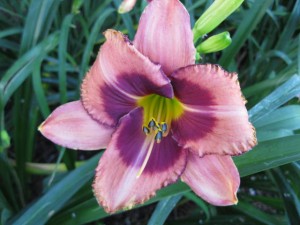 ‘Joan Senior’ is very close to pure white; there is no truly white daylily. 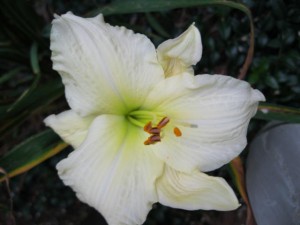 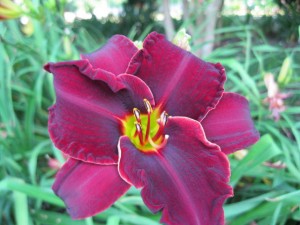 ‘Raspberry Wine’ has a delicious red color that you can almost taste. 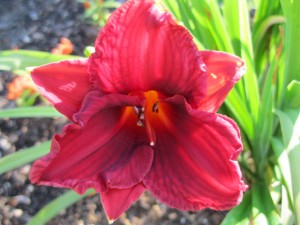 In the bog garden the Venus flytraps are blooming, a first for us, and we are hoping that it will self seed and we will have more. 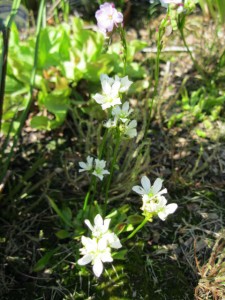 Also in the bog, the sundews are putting out flowers on thin stems. They are annuals but readily self seed. 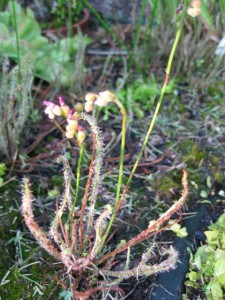 In the formal garden the crocosmia ‘Lucifer’ are beginning to bloom. 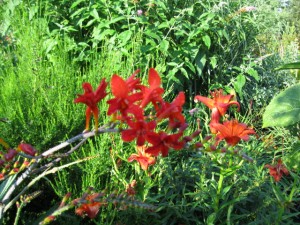 These are just in time to pick up the color of the Asiatic lily ‘Gran Paradiso’ growing next to it. I like the contrast of textures of the two blooms. 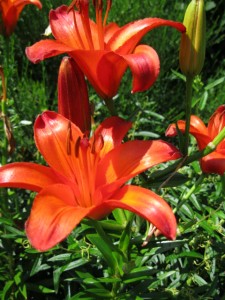 The yarrow is winding down in front of the species lily with its recurved flower petals and long anthers. 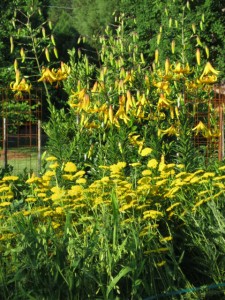 Yellow pokers are a strong vertical elements against the tall yellow daylilies in the background.  The pink coneflowers are a god example of an unwanted volunteer.  sorry, it’s got to go. 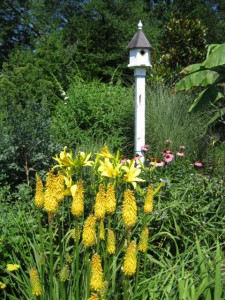 A few stems of obedient plant have poked their head above the gooseneck lysamachia. The original obedient plants grew with abandon and took over most of the bed the first year I had them pushing me to pull them all out. A few survived and appear here and there. I like them in small numbers and let them alone, hoping they will form small and manageable clumps. Here, the aggressively spreading gooseneck lysamachia will give it a run for its money. 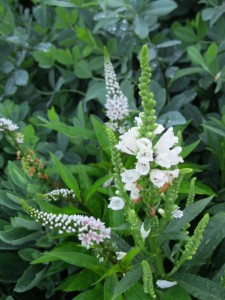 The garden phlox ‘David’ is complemented this week by the Shasta daisy ‘Becky’. 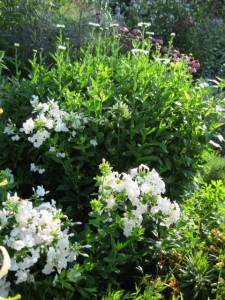 The coneflowers continue with their oddball flowers. I am especially fond of these green ones. 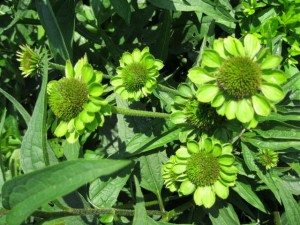 The pink coneflowers nearby form a background for the beebalm. 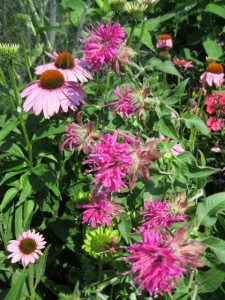 The rose garden is quiet but that does mean there is no work to be done there. We have a regular spraying program and we had to proceed. The high temperatures create a problem because the protective clothing I have to wear makes the job even hotter. We decided to tackle the spraying in the evening after dinner and it worked out well. I used to spray with a tank on my back but have so many roses it took many refills and 3 hours so I was always worn out, hot, and had a sore back. The head gardener decided to mechanize the process and now he drives a 16 gallon tank full of spray while I apply it. 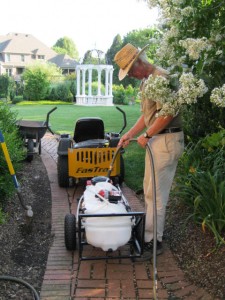 It only takes a couple of tablespoons of fungicide to do over 50 roses. I use a systemic fungicide to discourage the development of mildew and blackspot and I don’t usually use pesticides, although I have some for emergencies. Yes, I have insect damage but I am OK with it as I don’t like the side effects of insecticides namely killing earthworms and anything that eats them. 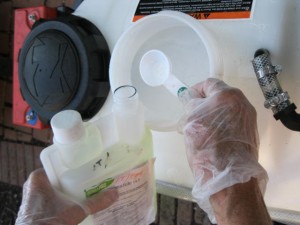 The spraying is easy now because the fungicide is pumped out and all I have to do is move the wand to get dripping wet coverage on both sides of the leaves. 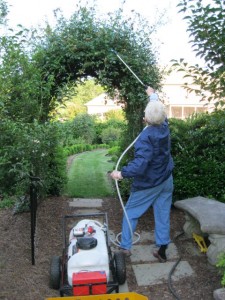 This time we had to spray the hollyhocks too as rust is beginning to develop because of all the rain and dampness we have had.  The tiny dots are the rust; small now but in time could cover the leave. 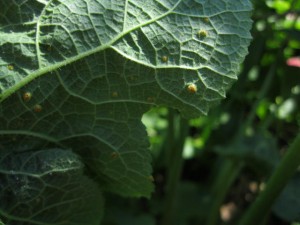 The vegetables are looking good. The tomatoes are beginning to fill the cages. 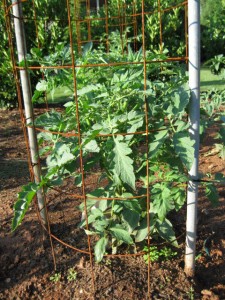 And one tomato plant is producing the first flowers. 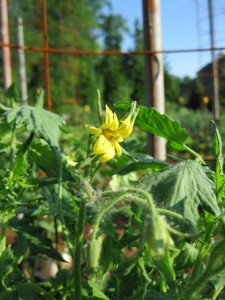 The banana peppers are ready to harvest. 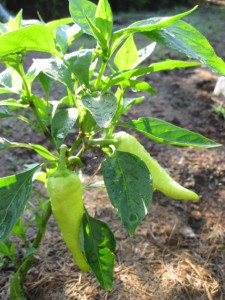 We have been enjoying musclun from the garden for a couple of weeks but the hot weather will probably put an end to fresh greens from the garden until fall when I can get another crop. 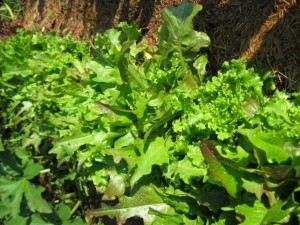 The blueberries I have been watching for many weeks finally produced enough berries to pick for some delectable treat. 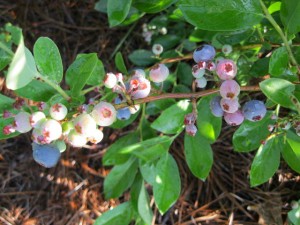 Picking them is trickier than it looks as the berries don’t ripen in a row and sometimes look ripe on one side but are still red on the other. You can see it once the berries are in the bowl. 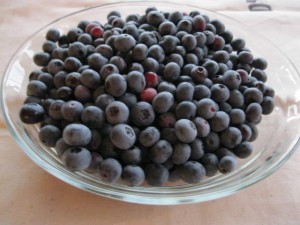 I made blueberry pancakes for breakfast. 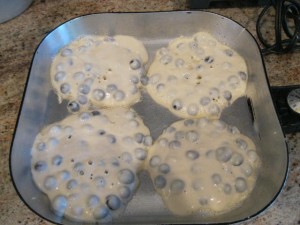