After days of clouds and rain the sun finally came out bringing warm to hot temperatures and lots of flowers in all parts of the garden. This was a week of taking cuttings and planting seeds for mid- to late summer blooms as well as biennials for next year; and evenings were spent trying to get in all the annuals planted that will add color through out the gardening season. The daffodil greens have suddenly fallen and look terrible but at least I know that they will soon be history and I will be able to plant on top of them.

The yellow border in the formal garden continues to be the focus with more plants blooming there than in the pastel, white or hot border. The daylilies are coming along well and  ‘Happy Returns’ joined ‘Stella D’oro in bloom.  The tradescantia growing  behind it creates and pleasing yellow blue combination. 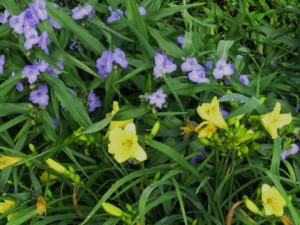 The Asiatic lilies ‘London’ are also complemented by the blue tradescantia. The tradescantia grow very tall in may garden. They eventually will topple over and I will have to cut them back but they will regrow and bloom again. 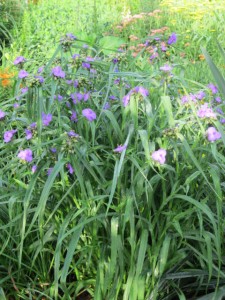 I have clumps of tradescantia growing through out the formal garden that create rhythm and unity in the garden. Most of the clumps are this vivid blue. 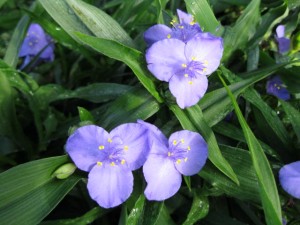 One plant, however, is lavender and is also considerably shorter than the others. 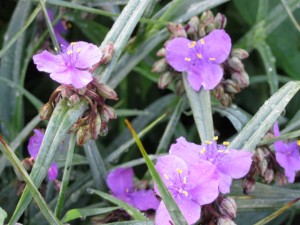 Another blue flower, the geranium ‘Johnson Blue’, forms a large spray over nearby plants. It only blooms for a few weeks in the spring but picks up the blue of the tradescantia that bloom elsewhere. The yellow pokers are putting on a display like never before. 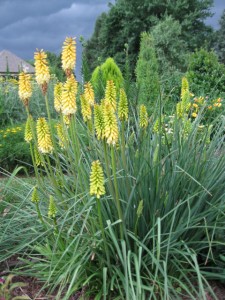 The pokers are a lovely buttery color and provide a unique texture in the garden. 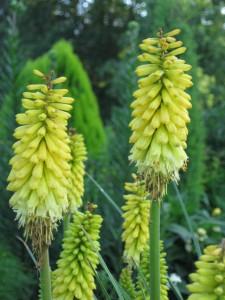 The yellow flowered creopsis ‘Zagreb’ grows at the feet of the yarrow “Cornation Gold’ complementing the golden golden color of the yarrow. 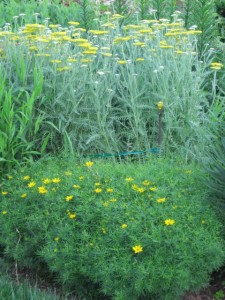 The butterflyweed showed color last week but now has really come into its own. 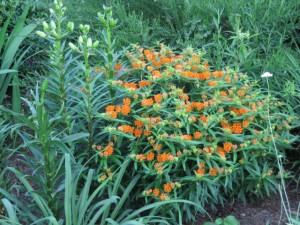 It carries out the color combination introduced by the gaillardia nearby. 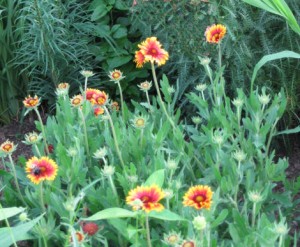 The last remaining yellow Johnny-jump-ups  around the large container in the center of the formal garden are about to go and be replaced by annual ageratum to complement the blue verbena “Homestead purple’ in the container. 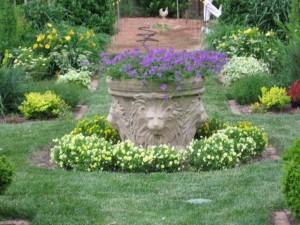 Elsewhere in the formal garden blue Johnny jump ups are also on their last legs but are so pretty with the bright pink rose in which they bloom that I can’t bear to pull them up. The rose supports them on their weak legs so their floppiness is tolerable; besides, they will be replaced by the rose as it grows larger during the summer so pulling them out can be put off a little longer. 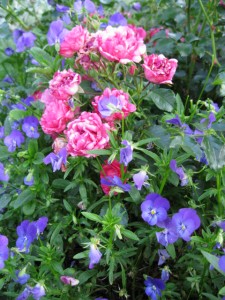 I have pulled bucketsfull of Lysamachia clethroides out of the garden leaving only one clump that I know about. It can be a terrible pest but the curve of the inflorescence is irresistible and I can not be without this plant. It is just beginning to bloom and will not last long but it is worth it.

The fennel is growing rapidly and I have already cut it back twice; their textures is a nice contrast to the large heavy leaves of the banana. I grew hollyhock from seed last year and planted them in the garden last fall. I spray them every time I spay my roses to beat down the rust problem that killed my first hollyhock stand 2 years ago and these are thriving. 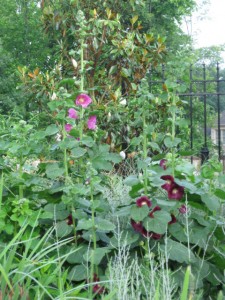 The yuccas have sent up their giant stalks and are beginning to bloom. Here it stands like a centennial near the rose ‘Olive’ that climbs over the arbor leading to the pool garden. In the pool garden the two Japanese iris plants that I transplanted there last fall are both blooming. 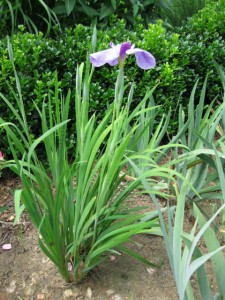 The flowers of this plant are not abundant but are quite large compared to the other Japanese iris I have. Perhaps once they nestle into their site they will produce more flowers. 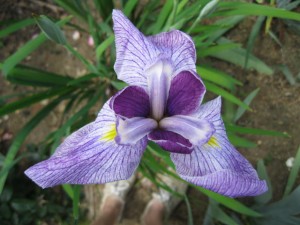 The Japanese iris in the bog garden, on the other hand, has sent up an abundance of flowers. This specimen was purchased in Atlanta at an end of the season sale and was planted in the bog garden 2 years ago. Japanese iris like moisture especially when flowering and it has done extremely well here. The flowers  of all Japanese iris are more open and flat than German or Siberian iris. The shade under the dogwood tree in the secret garden is home to these lovely pink astilbes. 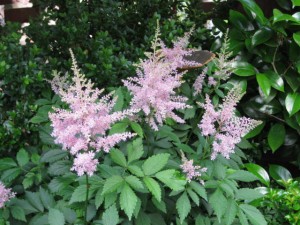 Heuchera ‘Dolce Peach Melba’  is also blooming there. I grow the heuchera for the foliage but I like the stems of flowers it produces and pick them for pressing in my numerous phone books. Over the weekend I made a birthday card for a dear friend using the heuchera with leaves from the Japanese maple that is also in the secret garden and the pansies that grew in the formal garden. 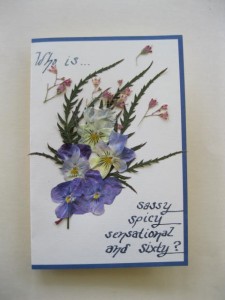 I found two plants at the local Loews that I could not resist. Eurphobia ‘Silver Swan’ will go in one of the white parterres. I have a big weakness for variegated plants and especially like euphorbias, so this would a double treat. 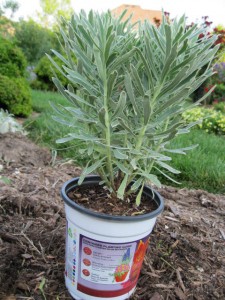 The speedwell, Veronica ‘Giles Van Hees’ will be planted in a parterre that is opposite the pastel border where it will provide verticle interest as well as soft pink color and interesting texture. The vegetable garden has yielded its first crop, three bunches of radishes like this one. We planted the pole beans, wax bush beans, zucchini, summer squash, acorn squash, eggplant, bell peppers, banana peppers, and eggplant and set up the tomato cages. It will be a while until we see the fruits of these labors but meantime the onions and lettuce will keep us munching.