A Visit to the Live Market, Hong Kong, China

For a very interesting experience at zero cost, visit a live market in any large city. The vegetables, fruits, meats and fish for sale will boggle the nose as well as the eyes and the earthy ambiance of such markets helps you see the city away from the tourists. On a recent trip to Hong Kong we visited the live market in Wanchai near the hotel where we were staying.  We had the good fortune to be accompanied by a delightful and well educated Chinese lady who knew a great deal about food and Chinese culture so we learned some very interesting things about both.

Expect to see a huge variety of foods presented in ways that may not be familiar. This is a nice way of saying that some items and activities are not for the squeamish. Fish markets are next to vegetable stands, with meat shops intermingled and all the food is available for purchase at curbside. The narrow streets are crowded and the pace of the transactions is rapid, creating an air of excitement. Freshness is an important value in food purchasing in Hong Kong the fishmonger’s were sensitive to this fact as they let their fish flop around in the pans for only a short amount of time before returning them to a tub of water. There was a constant rotation of fish from pan to tank with people buying some at various times.

Several meat markets had interesting cuts for sale, like these lungs. 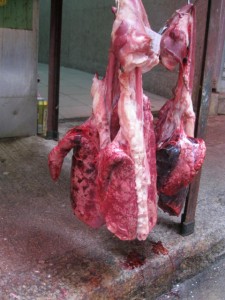 How about this pancreas for dinner? I had no idea a pancreases was so long and thin. 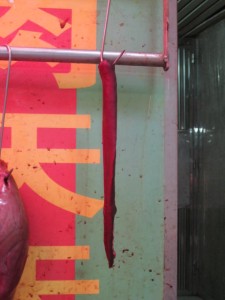 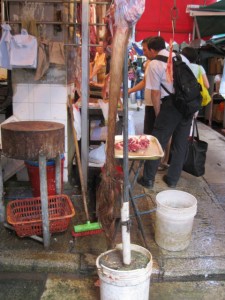 Once a customer chose his oxtail one of the butchers would strip the tail of its skin as the customer watched. 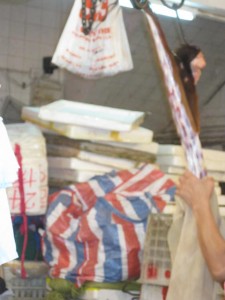 O.K., I am done with meat and fish; now to the vegetables and fruits that justify this post in a gardening venue. The dragon fruit was the most striking with its red color and strange covering. The pulp inside is slightly sweet and creamy, and usually eaten raw .  The seeds inside are indigestible unless chewed. 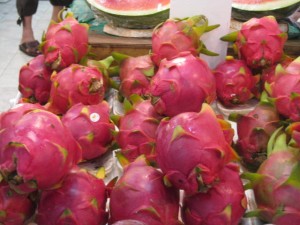 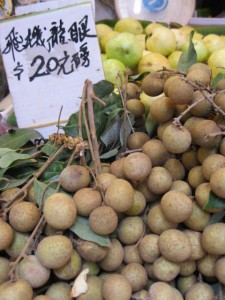 When I first saw custard apples I thought I was looking at artichokes but upon closer inspection saw that they were entirely different although their quilted skins gave them a layered leaf look.   These fruits grow on unattractive trees with leaves that are foul smelling but the fruits themselves are delicious.  The flesh is eaten raw, sometimes with ice cream as an accompaniment.  Although native to the West Indies, custard apple trees have been spread to Asia, Africa and beyond. 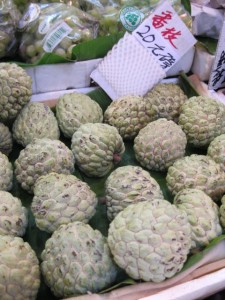 The yardlong beans were an eye catcher. Inspite of their name, they are more like 18” long but their length is striking all the same. A relative of cowpeas popular in the South, they are usually cut up into 1-2” lengths and are boiled or used in stir-fry but never steamed.

These giant carrots from Tiawan are too tough to eat raw and are used for soup.

Chinese cabbage was served at every lunch and dinner we ate on our 14 day trip in China. Fortunately both the head gardener and I like it a lot, and regarded it as a dear friend, especially when we did not recognize anything else we ate. 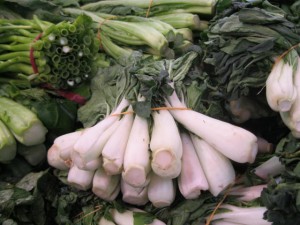 Many different kinds of mushrooms were available, these being abalone mushrooms, also called king trumpet, french horn, and king oyster mushrooms. Although native to Europe, the Middle East, and North Africa, they are commonly grown in Asia. As the mushrooms mature they develop the earthy, meaty flavor that makes them so good raw in salads, or cooked in stirfry and soups. The name comes from the fact that the texture of the cooked mushroom is like abalone. 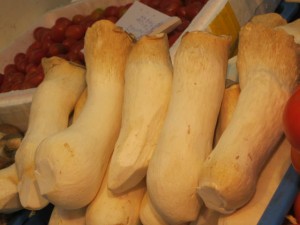 Prepared foods were available too.  Here, rice pyramids, bundles of sticky rice with sweet and savory filling all wrapped up and steamed in a bamboo leaf, are an easy “pick up on the run” food.

In a restaurant, another bundle of bamboo leaves turned out to have very interesting contents. We were told that it was chicken and the taste and texture were delicious. We had almost finished the foul when we uncovered the feet and head, all still attached to the carcass. Look closely at the picture and you can find the feet in the foreground and the head in the background. They were a surprise. 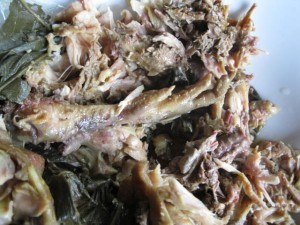 I love lotus flowers in pools, and the pods in dried arrangements, but here are lotus rhizomes ( a kind of stem botanically) ready for incorporation into dinner. They can be sliced and made into soup or stir-fry, finely cut and fried, braised or baked, adding crunchy texture and sweet flavor to various dishes. 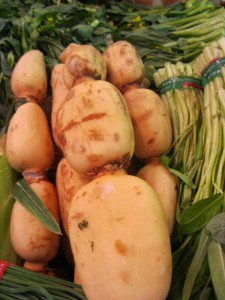 Another crunchy vegetable used in Chinese cooking is the water chestnut. If you cook Chinese dinners you probably buy them in little tins, but did you know that they are not nuts at all but rather the corms of a grass like plant that grows in marshes?  The Chinese wash them thoroughly (they grow in mud), remove the skins from the corms, soak them in salted water to clean them, and then eat them raw. They also eat them pickled, grilled, or slightly boiled. 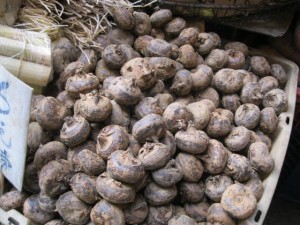 This pile of cornsilk with some cobs looked interesting and I wondered why so much of the silk was sitting on the crowded counter. The Chinese seem have a use for everything and the corn silk is used to make a special drink. 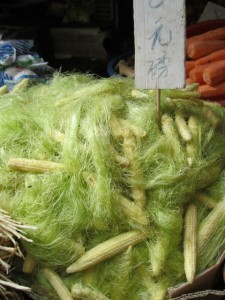 The corn silk is boiled alone or with any combination of water chestnuts, sugar cane, grass centers, mao geng (left), carrots and rock sugar or sugar cane (right) for about 40 minutes.  The resulting brew can be drunk hot or cold and protects against heat stroke.  Drinking too much of it, however, could cause coughing.  This all has to do with the yin (cold) and yang(hot) nature of our bodies with the drink being yin. 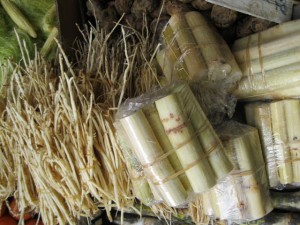 I left one of the great treats of the live market until the end; eggs…they come in several shades but the ones in the center of the picture are very special. 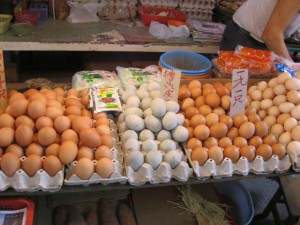 These gray and white eggs are called century eggs.

They are made by soaking the eggs (usually duck) in a mixture of clay, wood ash, lime, and salt, rolling them in rice hulls to keep them from sticking to each other, and leaving them to dry in jars or baskets. The pH of the egg is raised to over 9 during this drying time and the result is a preserved egg with a dark greenish yolk and a brown gelatinized white. It is said that in the old days the eggs were soaked in horse urine and buried for a long time, but this is probably just a myth. The eggs are often served with sliced ginger and we had one as an appetizer for lunch one day.  It was delicious and similar to a hard boiled egg but with more flavor and a smoother, creamier yolk. 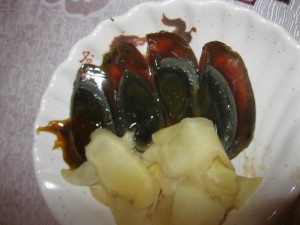 Our experience in the live market heightened our appreciated of Chinese cuisine and made us more aware of what we ate. Knowing more about the various foods available made our meals more enjoyable and certainly more interesting. We became more adventurous and willing to try new foods. I don’t know that I will ever become a great fan of ducks feet (yes, I ate a foot when we had Peking duck in a Beijing restaurant) but I am certainly glad I tried it and would try it again. The century egg was a real treat! Of course, we had our wonderful friend to help and guide us, and she made a real difference. Thank you, friend.