A Visit to Scotney Castle and Gardens, Lamberhurst, Kent, England 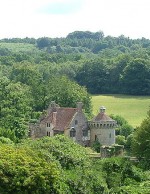 Perched high on a hill Scotney New Castle overlooks a beautiful view of the ruins of Scotney Old Castle in the valley below. The Old Castle was built c.1378-80 and was partially dismantled in 1843 to create garden ruins after the New Castle was built. The idea of ruins in a garden was popular at this time as part of the “Picturesque” style of gardening associated with the Romantic movement popular in England in the 18th century. The picturesque style favored natural landscapes over manicured ones and included architectural follies like rustic cottages and the castle ruins seen here. The castle ruins with its moat are the focal point of the garden that includes an herb garden, parkland, woodland, a fabulous azaleas, rhododendron and kalmia display in spring, and spectacular fall coloration in autumn. The garden was first planted in the 1840’s according to an overall design created by Edward Hussey, owner, with the help of William Sawrey Gilpin but more recent additions were made between 1952 to 1970 to create year round color in the garden.

The old fortified castle with one of its four towers remaining present a grand introduction to the site.

Other parts of the castle remain only in ruins creating the look that makes this site known as one of the most romantic in all of England. 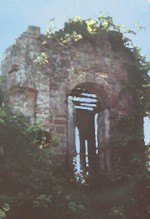 The courtyard in front of the Old Castle is a circular herb garden designed by Lanning Roper with a well head in the center.

The original moat is now a lake that together with the castle is the focus of the garden. 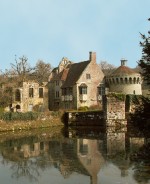 A boathouse built in the 1840s lies surrounded by trees and rushes. 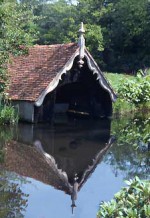 A statue by Moore, “Three piece Reclining Figure”, stands nearby.

On a slope leading to the New Castle there is an icehouse with a conical thatched roof and wooden door. It looks a lot like a rustic cottage, a popular feature in a “Picturesque” garden. 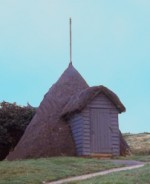 In spring you can enjoy the azalea-rhodendron display as captured here by Paste on Flickr.

And in fall, enjoy the autumn coloration with the old castle in the distance as seen by Roantrum on Flickr.

Spectacular in any season!