A Visit to the Gardens at Castle Drogo, near Drewsteignton, Devon, England

Castle Drogo was a considerable trek from our base but the prospect of seeing the creative efforts of Edwin Lutyens and Gertrude Jekyll were enough to spur us on. The castle, designed by Lutyens, was built in the 1910s and 1920s for the founder of the Home and Colonial Stores, Julius Drewe. Built of granite, it is an austere and formidable looking structure in a dramatic setting overlooking the gorge of the River Teign and commanding a superbe view of Dartmoor. The Arts and Crafts style garden is the result of a collaboration between Lutyens and Jekyll with the Lutyens providing the basic design and Jekyll the plantings. The orginal hardscape remains but the plantings have been modified over the years. This is a cold and windy place even in the summer so bring along a sweater and wind breaker when you visit.

The site was a difficult one and some of the original garden plans came to nothing because of the high winds. The gardens that you see, however, are beautiful and soften the harsh appearance of the castle and natural environment. Planted in a relatively protected area on the north–east side of the castle, the rectangular formal garden is surrounded by yew hedges with woodlands on both sides. In the center is the rose garden with its alternating blocks of lawn and rose beds of hybrid teas and floribundas.

Double herbaceous borders occupy one of the terraces above.

The paths between the herbaceous borders are especially interesting; Lutyens had been working on the design of New Delhi, India and he took the design for the paths from an Indian motif, alternating semicircles and straight lines. 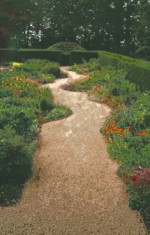 A formal herb garden adds interest to one of the terraces.

A beech colonnade gives a view of the gorge below. 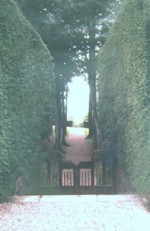 A one acre circular croquet lawn can be rented for croquet matches.

In spring rhododendrons and azaleas bloom as captured here by G. Marshall.

An arbor of clipped shrubs stands near the castle and is a reminder of the role that Lutyens played in the design of this unique garden.