If you take a trip to Rome you should seriously consider going to Tivoli to see the spectacular Villa D’Este. This is a garden that will knock your socks off for sure! You may think that you have seen spectacular water features but they will pale in comparison to those of Villa D’Este which has 250 waterfalls, 250 sprays, 50 fountains, 50 jets, 60 springs, and 200 ponds in addition to terraces, exedras, statues, and groves. And to make this all even more incredible, the garden was created in the Renaissance before there was electric power to work the fountains. I have visited this garden several times and it never fails to amaze and entertain me. 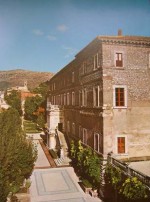 The man responsible for this magnificent garden was Cardinal Ippolito II D’Este, second son of the Duke of Ferrara and the infamous Lucrezia Borgia, who was educated in his father’s court at one of its most brilliant periods. He was cultured, artistic, creative, and aspired to the papacy so when he failed to gain that post and was retired to Tivoli as governor in 1550, he turned his energies to making the humble Benedictine monastery there into a grandiose palace worthy of his expectations. He hired the renowned mannerist architect Neapolitan Pirro Ligorio to design the palace and garden and when the building was completed commissioned the most distinguished artists of the times to decorate it. Meanwhile, Ligorio began the garden by removing a quarter of the existing town and creating terraces along a central axis with secondary cross axes each with their special water features and other adornments.

An old etching shows the extent of the original plan of the villa; the gardens are on a steep hillside and are meant to be entered from the bottom. A series of vistas was created as the visitor walked up the hillside through the garden culminating in the palace itself.

A recent map shows the existing plan; the modern entrance is at the top of the hillside and requires the visitor to go through the palace. Thus your first glimpse of the garden will not be as sensational as originally planned. When you get to the bottom of the hill turn around and look up to get the effect.

Just down from the villa on the central axis, is a giant shell like fountain holding a floral stone chalice emitting a spray of water. Built between 1660 and 1661, it may have been designed by G. Lorenzo Bellini. 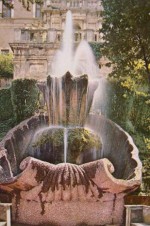 Ippolito II, like other educated men of the Renaissance, admired the culture of the ancients and many of the fountains and adornments have an ancient theme.  At the left side near the palace is the Diana grotto, richly decorated with mosaics, stuccoes, frescoes and reliefs of mythological characters and scenes. 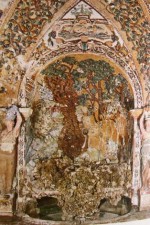 Nearby the Rometta (“Little Rome”) represents the course of the Aniene river of Tivoli into the Tiber of Rome. Small models of some of the ancient Roman landmarks are included such as the Pantheon, Augustus’ Mausoleum, Arch of Constantine, Temple of faustina, Trajan’s Column, and the Colosseum. The statue of the Goddess Rome and the she-wolf that suckled Romulus and Remus are also present. Visitors who sat down in the old days stood up with wet seats because the benches had holes conducting water to the bench surface. The nearby stairs had hidden jets that sprayed visitors from the waist down. Ugh; not funny to me but the Renaissace people thought such tricks hilarious.

A fountain in the form of a ship representing Isola Tiberina sits in an area where the water course widens.

A long walkway with 100 fountains leads from the Rometta to the other side of the garden. The fountains are of four types each having a different spray: eagles, obelisks, fleur de lis and small boats. Originally the fountains were decorated with stucco but the stucco has disappeared. The sound of the water is as enchanting as the sight of it.

The walkway of fountains ends on the right side with the magnificent Ovato fountain. The water is drawn from the Aniene river, flows into the pool, and then supplies almost the rest of the garden. An exedra with ten arches runs around the back of the pool and trick water jets were installed here. It is the best place in the whole garden for cooling off on a hot day. While basking in the mist there you can enjoy the statues of mythological heroes significant to the Este family. The exedra is said to represent the Tivoli falls while the upper part of the fountain represent the Tiburtine Mountains. The walls around the pool are decorated with majolica tiles bearing the eagles and fleur-de-lis if the Este family.

The personification of the Aniene river and the Sybil, who is said to have revealed the birth of Christ to the emperor Augusts, are positioned below with the water of the river flowing over the feet of the Sybil and then into the fountain.

Above the Ovato Fountain is a fountain featuring Pegasus, the mythical winged horse borne from the blood of Medusa and used by Belerophon to conquer the Chimera. He stands here ready to take off to Mt. Parnassus home of the Muses, his head turned toward the villa. 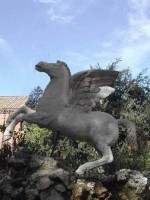 The Owl fountain near by is a spectacular achievement; a water driven device causes a bronze owl to appear at intervals emitting a screech that silences the twittering birds created by other hydraulic machinations. This is really amazing! But it was copied from an ancient Greek treatise by Hero of Alexandria!! This fountain originally had 8 niches each with a water jet and trick water jets in the pavement to surprise visitors. 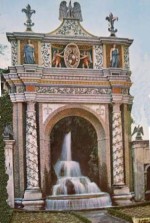 To the left of the owl fountain is Proserpina’s fountain. In the center recess there is a shell shaped boat drawn by horses that carry Proserpina, abducted by Pluto, to Hades.

In the center of this horizontal axis is the Dragon Fountain. It consists of four winged dragons spitting into an oval pool with a huge jet of water that rises above them. The jets in the fountain vary so that a sound like canon fire alternates with a sound like gun fire; or perhaps it all sounds like a down pour of rain. The fountain may commemorate the eleventh labor of Hercules; the killing of the 100 headed Ladone dragon. This story would have special significacne to the cardinal because Hercules was the patron of Tivoli and the Este family. Hercules was seen as the prefiguration of Christ achieving immortality through a virtuous life and good works just; the cardinal hoped for immortality in a similar way through his temperance, prudence, chastity, and patronage of the arts.

The water in the handrails of the stairs bordering the Dragon Fountain falls into basins in such a way that it appear to be boiling thus giving the stairway the name Condonata dei Bollori (The Boiling Water Steps).

Spinxes at the top provide water spraying from their nipples, typical of Renaissance taste.

Three large rectangular fish ponds with 48 jets dominate the center area of the lower level. Originally they were used to raise trout and other fish for the table of the cardinal but now they provide a welcome contrast to the energy of the fountains all around them. The reflection of the large trees enhance the effect.

The baroque Organ Fountain containing the amazing hydraulic organ created by the Frenchman Claude Venard stands majestically to the right of the villa on the lower level. Sound is created by a leak of air from the organ pipes that is determined by the fall of water. The fountain is decorated with tritons and mermaids and a multitude of other classical ornatments while Orpheus and Apollo occupy niches on either side of a central eight sided structure. Orignally, two urchins sprayed water down on visitors from the entrance and ground jets surprise passersby. 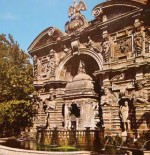 Below the Organ Fountain the modern Neptune Fountain puts on its display. Built in 1927, its sprays are made up of two or more jets, one above the other, to produce a composite column of water. 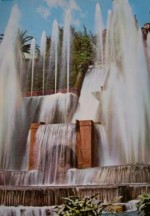 Also in the lower area is the statue of Diana of Ephesus, symbol of fertility, originally part of the Organ Fountain but now in a rustic fountain of its own. 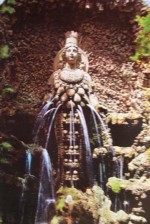 Another fountain found on the lower level is the Meta Fountain, a large tiered moss covered fountain representing the Meta Sudante, a fountain near the Arch of Constantine in Rome. 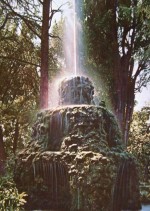 At the center of the lower level is the cypress rotunda. This is the area that guests would have entered in olden times and it is the place that you should turn around and look at the grandeur of the palace and waterworks through the tree tops. 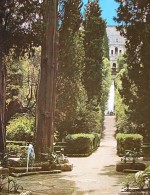 Keep in mind as you look that all of those water features are done without an electric pump! Wow. What a feat. Ligorio was a genius to be sure, but he also had the smarts to enlist the help of the experts of his time.  The concept, however, was his; the organization was his, and the credit for this incredible place is his.  Thank you, Ligorio.