The Best Pumpkins for Pumkin Pie 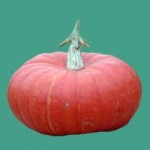 Not all pumpkins are created equal. True, they are all edible, but some make better pie filling that others. The most desirable traits for making pie are taste and texture. Taste can be enhanced with spices and flavorings but why not get a pumpkin with a truly good flavor to start with? Texture is another matter. You don’t want a stringy pie filling. smooth is the quality you want.

Pumpkins have been bred for two very different uses; ornamental and culinary. A pumpkin bred for its ornamental qualities is generally larger, less dense (and therefore watery), and have a flat bottom so they will stand up. There are some very small varieties grown as ornamentals but unless they have been bred for taste and texture too they will be only moderately acceptable in pies. Culinary pumpkins, on the other hand, are generally small to medium in size, with dense, smooth flesh. Some of them are very attractive and many have excellent keeping qualities. Here are some pumpkin varieties bred for their usefulness in cooking but they all can be carved too.

New England Pie (Cucurbita pepo)
Also known as Northern pie and sugar pie, this heirloom variety is the traditional pie-pumpkin used on the East coast. It is considered by most people to be the premiere pumpkin for pies because of its sweetness and smooth texture. The small fruits weight only 5-8 pounds, have bright orange skin, and make good mini jack-o-lanterns as well as pie filling. ‘Baby Pam Sugar’, the modern equivalent, is slightly smaller and is favored by commercial growers because of its uniform size.

Winter Luxury (Curcurbita pepo)
An heirloom pumpkin than has been around over 100 years, Winter Luxury is globe shaped, and has finely netted skin and a golden russet color. At about 6 pounds, it is a small pumpkin but has the sweet smooth flesh good for pies and is a good keeper.

Long Island Cheese (Curcurbita moschata)
The flattened shape and coloring resembling a wheel of cheese gave this heirloom squash its name. It was a favorite of the people of New York and New Jersey for pie in the 1800s although it is not as sweet as some other pie pumpkins. It weights 6-10 pounds, has buff colored fruits and a long storage life.

Rouge Vif d’Estampes (Curcurbita maxima)
Also called the Cinderella pumpkin because of its resemblance to the pumpkin coach of Cindererella fame, this French heirloom pumpkin is deep red-orange, flattened, and deeply ribbed. It is the largest pumpkin traditionally used for cooking, weighing in at up to 25 pounds. It measures 15” in diameter and 6” high. It’s shape makes it very appealing as part of a holiday center piece especially for children.

The New England pie (i.e. sugar pie) pumpkin is the most easily found but if you are inclined to grow your own pumpkins for cooking, your choices are considerablely greater. Many on-line seed companies off seed of the less available culinary pumpkins so start early and by fall you will have your very own pumpkins.