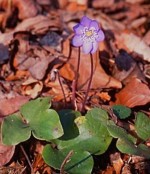 This is one of those plants that has a certain aura because of its association with the “doctrine of signatures”, a belief that links the shape of a plant with the plant’s use as a medicinal herb. As a history buff I find such plants irresistibly interesting but this plant has more to offer than just an archaic historical belief. It blooms very early, each flower only lasting a short time, but the colony producing flowers over a 2-3 week period. The leaves, which have persisted from the previous season, are usually reddish brown at this point and die but are followed by new green leaves in late spring. This is a good plant for a woodland, shade, or rock garden.

Bloom: White, pastel blue, pink, or lavender flowers, up to 1” across, are borne singly on 3-4” leafless stems in early spring.

Light: Sun to full shade but prefers dappled sun in spring and light shade in the summer.