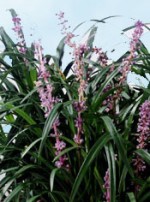 I first saw this plant used in a border and later saw it used as a ground cover. Its grass like leaves are a bit shaggy for a ground cover for my taste and I much prefer to use it in my borders. I like it so well, in fact, that I have several different kinds; ones with different sized leaves and with differences in variegation. The diverse colors and leaf size create very various textures that add interest to any planting. The flowers are an additional bonus and I enjoy them in the garden as well as in the house where they supply a vertical accent to small bouquets. Both in the border or as a ground cover, lirope is a tough plant that laughs at heat, humidity, drought and disease. It grows in almost all light conditions but may singe in full sun or bloom with fewer flowers in too much shade. It forms clumps quickly and can tolerate considerable abuse when being divided and relocated to a new site (sometimes I have been slow to decide where to put new divisions, but lirope was OK anyway). Even though I do not use lirope as a ground cover I know that it does the job well as it grows so thickly that weeds can not grow through it and it needs only an early season mowing to keep it looking its best. The plant is evergreen but new leaves are produced each spring so the old ones should be removed before they look shabby and die.

Bloom: Spikes of lavender-blue small flowers are borne in late summer to fall.

Companion plants: Use as underplanting with evergreen shrubs such as clethra, viburnums, holly, sweet box, and skimmia.