Wisteria is either your pride and joy or the bane of your existence depending on whether or not it blooms each spring. Nothing is more romantic than long racemes of wisteria blossoms pouring down from the leafy stems above. I have to admit that I have lived near a house that set the standard for beautiful wisteria. The house one block away from mine featured a mature wisteria that bloomed every spring and inspired people from all over the area to drive by and admire it. The house itself was noteworthy as it was in the Queen Anne Victorian style and was a beauty in its own right. Draped with a classic vision of wisteria, it was breath taking. And so when we moved to North Carolina and built a house there, I had only one plant in mind for the pergola outside out back door; wisteria. 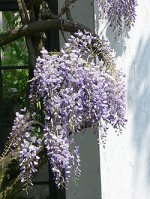 He most common kind of wisteria is Wisteria floribunda, Japanese Wisteria but Chinese Wisteria (Wisteria sinensis) and American Wisteria (Wisteria frutescens ) are also available. The two Asian species are vigorous growers and can easily get out of hand, especially the Chinese species which is considered “ruthless” by some. They can grow over or under a shed or garage in a single season and can emerge in your lawn far from the original planting. On the other hand, their vigorous growth will allow it to cover a pergola or arbor in a couple of seasons. Japanese Wisteria blooms longer than Chinese Wisteria.

The most common problem of the Asian wisterias is their refusal to bloom. The cause is usually one of three possibilities: lack of sun, lack of maturity/age or too much fertilizer.
1. Plant your wisteria in full sun.
2. Buy only named varieties that have been grafted to circumvent lack of matuity. Don’t buy unnamed wisteria unless they are bearing flowers so that you can be assured that your plant is old enough to bloom. Wisteria grown from seed take up to 20 years to bloom so you can get mighty impatient waiting years while watching your monster grow and flourish.
3. Cut back on fertilizer (particularly nitrogen) if you have the plant in full sun and know the cultivar name of your plant.

Cold temperatures can kill buds, but this is unlikely to be the cause of no bloom year after year so unless you know that winterkill has occurred in your area hope for this cause. W. floribunda ‘Alba’ is less susceptible to late-spring frosts. 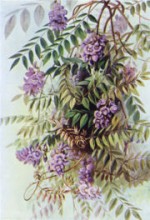 If you are OK with a wisteria that is much better behaved (i.e. is less vigorous) but does not have as showy flowers try an American native such as Wisteria frustecens. This wisteria grows much more slowly, produces its flowers in short racemes a bit later than the Japanese Wisteria and is a repeat bloomer.

Type: Deciduous vine but can be trained into small tree.

Bloom: White, pink or lavender in racemes before the leaves appear (Japanese and Chinese racemes are much longer than American); Spring (Japanese Wisteria is the earliest, American the latest) Chinese flowers are fragrant.

Fertilizer: Apply an organic or slow release fertilizer immediately after flowering the first couple of years but after that give them noting. More fertilizer will cause excessive vegetative growth and decreased flowering.

Care: Prune back side shoots to the basal few buds in early spring to enhance the bloom. Sometimes wisteria can be brought into bloom by abusing the main trunk, root pruning, or drought stress. If you want to decrease the size of the vine, cut back side shoots during mid summer to fall.

Companion plants: The issue here is the support. Sturdy arbors, pergolas, fences and gazebos will look terrific with a well grown, flowering wisteria.

Comment: According to Wikipedia, “the world’s largest known Wisteria vine is located in Sierra Madre, California, measuring more than an acre in size and weighing 250 tons. “ Now that is a monster plant!

Next post: Seven Points to Ponder When Selecting Tomato Plants