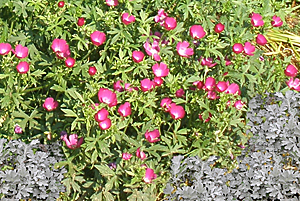 Purple poppy mallow is a herbaceous perennial native to much of the central part of the United States where they grow in dry soil in open places such as prairies and along roadsides. They are evergreen or semievergreen, mat-forming perennials and can be an attractive groundcover. Flowers are cup-shaped, 2.5 inches wide, and have magenta petals marked with white at the base. They are upward facing, borne singly on slender stems, and close in the afternoon. The roundish leaves are deeply lobed.

One of the most beautiful of the Artemisias, ‘Silver Brocade’ is an herbaceous perennial that forms a dense mound of highly decorative silvery leaves. Soft yellow flowers are produced in late summer but are generally not considered ornamentally significant. In hot humid areas plants tend to melt out in mid- summer and Artemisia ‘Powis Castle’ can be substituted.