Botany for Gardeners: The Root-Modifications 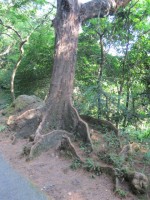 When someone says the word “root” you probably think of a big brown hairy mass or a long brown tapered object. But these are only two of the many kinds of roots that exist; they are the typical kind of roots that land plants have. But not all plants have roots that grow in the soil. For example, some live in water and have a problem getting air, others live in the air and have trouble keeping, absorbing and holding water. Some vines have a set of roots in the soil but also develop roots along their stems so that it can grow on vertical surfaces. Some plants have roots in the soil but produces above ground roots to help them stand vertically. And so it goes. Depending on the environment, many plants have evolved different kinds of roots to carry out the usual root functions with modifications to meet the demands of their particular environment.

Many of the root modifications involve roots that grow from stems or leaves, rather than from the primary root. These are called adventitious roots and here are some interesting examples.

Ivy: The most familiar are probably the little roots that form along an ivy stem that allow it to grow up a wall, fence or other structure. These aerial roots are probably not damaging to the brick, stone or mortar if those materials are in good shape to begin with but can cause serious damage if cracks exist for the roots to enter. Wood structures are a different matter as the roots can get into the grain, expand by growing, and split the wood.

Orchids: Some orchids like Vandas are epiphytic and grow on trees without hurting them. The orchids derive moisture and nutrients from the air and rain with their aerial roots that can be a few yards long. Older roots have a spongy outer layer called a velamen that can absorb moisture in the air and make it available to the plant. Some have chlorophyll so can manufacture food for the orchid. 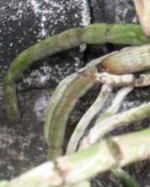 Corn: Corn plants have shallow roots systems the plants are easily blown over. Nodes on the stem produce prop roots that help keep the plant upright. 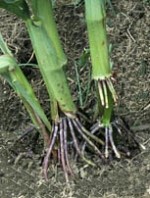 Fig: Your everyday fig tree houseplant when growing in the wild also has prop roots and they can become quite massive. 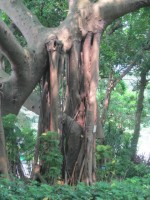 Cypress: If you have ever visited a large southern swamp you probably noticed that many of the trees have large structures that grow horizontally from the trunk above the water and then bend sharply down into the water. These may provide the roots with oxygen or may be prop roots to help stabilize them in their muddy soil.

Mangroves: Trees that live in tidal areas are often called mangroves. Black mangroves survive by producing straw-like roots called pneumatophores that stick out of the soil to take in oxygen. The pneumatophores can grow over 9 feet tall and may be combined with buttress roots to give support.

Some plants produce roots as part of their asexual reproduction:

Strawberry: If you grow strawberries you probably hope that they will put out stolons (actually horizontal stems) that will produce roots and begin new plants for you. Unfortunately some weedy grasses spread the same way.

Spider Plant: Those long aerial stems that make the plant look so spidery are stolons and produce new plants, including roots.

Adventitious roots may have swellings in various places and the swelling may be regular or not:

Sweet Potato: The root is swollen in no definite shape and is produced singly.

Dahlia: A cluster of swollen adventitious roots is produced, usually at the base of the stem.

Ginger: The tip of the root is swollen.

Bitter melon (momordica): Swellings occur along the root and resemble beads on a necklace.

A different kind of root modification is found in some parasitic plants.

Mistletoe: This Christmas favorite is a true parasite, deriving its nutrients from a host plant that is thus hurt by the relationship. The mistletoe produces haustorial roots that attach to the host plant by a sticky disc and then grow into the tissue of the host.

Some taproots are adapted for storage; they may be thickened in various places producing different shapes.  Three main patterns can be identified best illustrated by these examples:

Radish: The middle of the taproot is thickened tapering on both ends.

Beet: The base of the taproot is thickened, tapering quickly to the tip.

Carrot: The base of the taproot is thickened with a slow tapering to the tip, giving the root a conical shape.

Roots are amazing structures. They have evolved to aid the plant by giving it what it needs to survive in its environment and somewhere along the way man got into the act and found a way to take advantage of some of the adaptations. Lucky us.