A Visit to a Hutong Residence and Garden, Beijing, China. 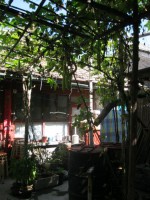 Most of the gardens we visit on our travels belong to the rich, super rich or government but occasionally we are able to visit a garden belonging to an ordinary citizen. Such was the case on our recent trip to Beijing, China when our tour included a morning visit to a working class neighborhood where numerous courtyard houses called siheyuans were lined up along narrow streets called hutongs. Hutongs are typical lanes or small streets that developed during the Yuan Dynasty (1271-1368) as people settled around the Forbidden City, and the term has also come to refer to the neighborhoods that developed. Many hutongs were demolished in the 20th century as progress brought new development but the Chinese government has recently initiated a policy to preserve some of these areas. Lucky us.

The entrance to some of the residences is grand. 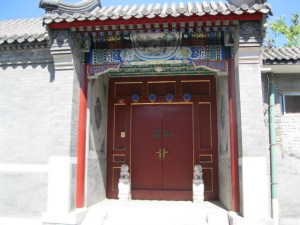 But the house we visited was a more humble abode and featured shops in the front along the street that sold paper cuts and drawings. 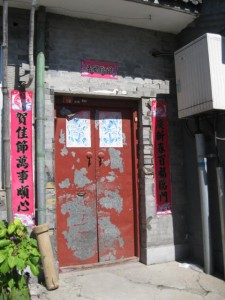 As we stood before the residence we noticed that gardening efforts were apparent on the roof.

Inside the entrance we found ourselves in a courtyard open to the sky and surrounded by rooms, each opening to the courtyard.  The courtyard was small and the light coming into it was limited but many plants were growing and the vines covering the pergola gave a lush and pleasant feeling to the whole area.

Plants grew on the walls… 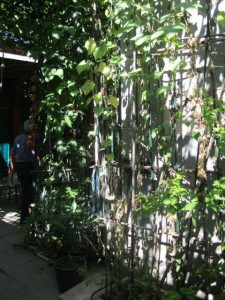 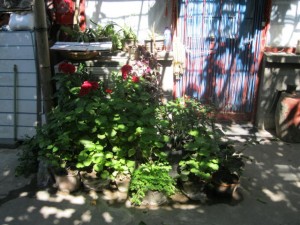 The rooms, including the shops, completely surrounded the courtyard. The woman of the house was busy cooking. 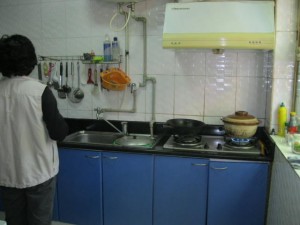 And a table in the dinning room was set for the extended family. 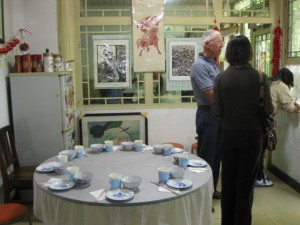 Bedrooms occupied the opposite side of the house. 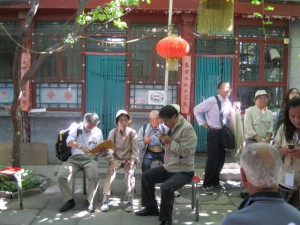 You will not see the ponds, pavilions, or piles of rocks, typical of the gardens of the imperial or scholar’s gardens of China but the hutong gardens will give you a whole different perspective and appreciated of the Chinese view of gardens. Here you will find the life of the everyday city dweller who still gets around his neighborhood by pedicab or bicycle.