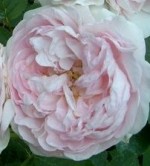 The name “Alba’ would lead you to believe that these roses are white. In fact, they are also various shades of light pink. They are the result of a cross between a Damask and the native dog rose, Rosa canina, and have been around for a long time, but there is no agreement on the exact date of introduction. Some believe that the ancient Romans had them and that Pliny the Elder mentioned them in the first century AD in his Natural History, while others believe that they were introduced considerably later. Albas are associated by some with the white rose of the House of York and they are believed to be the rose pictured in the paintings of such Renaissance artists as Botticelli and Crivelli. They were very popular in the 17th and 18th centuries but are relatively difficult to find in the United States at this time.

Albas have some outstanding characteristics like strong fragrance and moderate shade tolerance but unfortunately only bloom once in the spring or early summer. Their foliage is gray-green or blue-green and some cultivars produce attractive hips.

Petal Number: 5-200 depending on the cultivar

Flower Form: Flat, may be quartered, with central button

Flowering: Once in spring or early summer

Fragrance: Moderate to strong with overtones of citrus

Disease Resistance: Moderate to good; some susceptible to mildew and rust

Here are three albas that have excellent American Rose Society ratings and are most likely to be found for sale:

‘Celestial’ (also known as ‘Celeste) has soft pink flowers with a sweet frabgrance and grows to 6’ tall. ‘Celestial’ is considered one of the best albas.

‘Great Maiden’s Blush’ grows to 5’ and has frgrant white flowers tinged with pink.

The flowers of ‘Konigin von Danemark’ are flesh pink with darker centers have a strong fragrance, and are borne on a 7’ spreading bush.