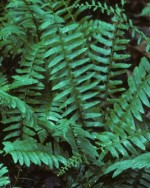 Grown for its glossy, leathery evergreen fronds, Christmas fern makes an attractive addition to a woodland garden all year long. It is clump-forming and compact, and stays neat looking all year long. Silvery fiddleheads emerge in spring and slowly unfurl as the previous year’s frond turn brown. Fronds are light green at first but turn dark green and they mature. After the first frost fronds are usually lying on the ground in a swirl and help keep leaves falling from the trees in place. A native of moist woodlands of the Northeast, Christmas fern is easy to grow and can be used in a formal shade garden as well as an informal woodland garden. The common name comes from the gathering of fronds for use as Christmas decorations.

Bloom: Spores found on the undersides of terminal pinnae of fertile fronds. Fertile fronds are taller than other fronds in the clump

Propagation: Division in spring; spores can be sown when ripe at 59-61 F.

Next post: Weeds and Their Control: Horseweed (Conyza canadensis)