Birds in the Garden: Plants that Attract the Chickadee and Titmouse Family 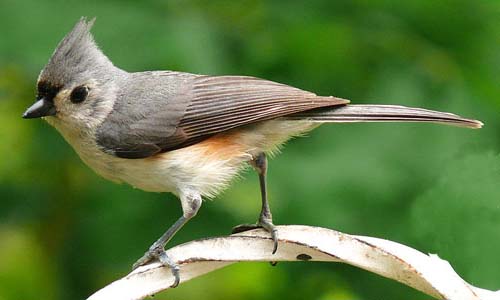 Chickadees and titmice are considered social, friendly birds and are frequent visitors to backyards and feeders. They usually live together in small flocks in woods eating primarily insects, seeds, and nuts. They like all stages of insect development, eggs, larvae, pupa and adults and spend a considerable amount of time searching every possible hiding place on a tree. Chickadees are more widespread in the United States but both kinds of birds stay within their range all year long, although migrating around in it. Generally small and gray, some species have attractive markings on their heads and some titmice have crests.

To attract chickadees and titmice plant trees that produce seeds or nuts and have plenty of branches and leaves that attract insects. Both kinds of birds like to nest in upright trees or shrubs that are eight feet and taller and tend to ignore weeping specimens.

Birch are fast growing small to medium deciduous trees or shrubs often with beautiful bark. They produce attractive catkins and often have good yellow fall color. Insects living on the plants as well as seeds are eaten by chickadees, titmice and other birds such as vireos, warblers, flycatchers and finches. Birch is a great choice for a bird garden but, unfortunately, is short-lived.

The redbuds are small deciduous trees with purplish-pink flowers in spring that grow from the trunk and branches before the heart-shaped leaves appear. They are outstanding garden specimens as well as outstanding bird trees, providing food for chickadees, titmice, warblers woodpeckers, vireos, flycatchers and many others.

Spruce is a large evergreen conifer with short prickly needles. It provides food and roosting sites for chickadees and titmice as well as many other birds. The natural shapes are better for birds than dwarf or contorted forms.

This evergreen conifer has short soft needles and small cones. It grows quickly to about 20′ and then grows  more slowly to maturity at about 100′. It provides food for chickadees and titmice, and roosting for many other birds.

Although slow growing, these large deciduous trees are a good source of food for chickadees and titmice as well as other birds such as tanagers, orioles, vireos, warblers, and flycatchers. Native species are host plants for butterflies and moths. If you have a choice, choose a white oak for its very tasty acorns.

The brown felt on the stems of these very attractive ferns is prized nesting material chickadees and titmice. The ferns are both beautiful garden plants and can provide cover for ground dwelling plants such as towhees, thrushes and native sparrows. Both are deciduous and perennial.