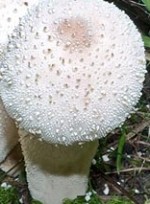 Also called devil’s snuff box and gem studded puffball, this fungus is found in groups growing in woods  on buried leaf litter and decaying in especially in the fall. It belongs to the group called Gasteromycetes characterized by a spherical shape and underground habitat when immature, production of spores inside fruiting bodies, and lack of gills or tubes. Puffballs are pear-shaped, white,1.5 to 4 inches high and up to five inches across, and are covered with little warts and spines, more on the round head than on the tapering stalk. When cut longitudinally, the gleba or internal flesh of a young puffball can be seen to be white and undifferentiated. As it matures the gleba turns olive-yellow, then brownish, then dust-like as it differentiates into spores that are released and dispersed by the wind through a hole that is formed in the top of the puffball.

Puffballs are edible when young and the internal flesh is white but are bland and not considered tasty. They can be sautéed with butter and herbs and make a reasonably good companion for eggs. Once the gleba is yellow or a hole appears in the top of the puffball, the fungus is no longer suitable for eating. When harvesting puffballs, care should be taken to distinguish them from the immature fruit bodies of poisonous Amanita species. Young puffballs have external warts and spines that Amanita usually lack, and puffballs have an undifferentiated flesh inside while Amanita have an internal embryonic mushroom. Caution is the best policy when dealing with fungi so the advice of an expert is recommended before eating any that are gathered from the wild.

Next post: Plants of the Bible: Apple (Malus domestica aka M. pumila)