Botany for Gardeners: The Stem-Tissues and Their Functions 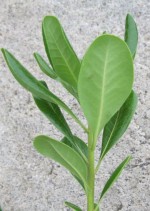 Stems carry out many functions, producing and holding up lateral stems, flowers and leaves, conducting food and water between the root and these parts, and storing food. In order to carry out these roles, stems have developed specialized tissues. These tissues allow stems to be more efficient so the plant can grow and reproduce. As gardeners, we want the leaves to look fresh and attractive, and flowers to give color to our garden beds, but we would have neither without the specialized tissues in the stems.

Let’s start with a typical stem of an annual or perennial, like a sunflower or daisy that have stems that last for only one season. They have four major tissues: 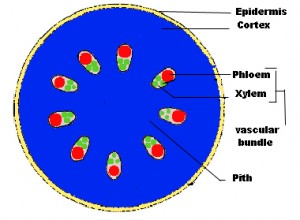 Epidermis: This tissue consists of a single layer of closely packed cells that form a protective covering on the stem. They are exposed to the dry air and thus could cause the plant to loose excessive water. The epidermal cells, however, secrete a waxy substance called the cuticle that reduces water evaporation. The cuticle also reduces the diffusion of carbon dioxide and oxygen and so some stems have pores with adjustable openings, called stomata (singular stoma) that facilitate gas exchange.

Cortex: This tissue consists of loosely packed cells that hold water, convert sugar to starch, and store the starch. Because of their water holding capacity they contribute to the support of the plant. When water is lacking, the water content of the cortex cells decreases and the plant stem bends, causing wilting. Cortex cells may contain chloroplasts (and therefore will be green) and carry out photosynthesis, the food manufacturing activity of a plant, usually associated with the leaf.

Vascular Tissue: Bundles of phloem and xylem make up the vascular tissue of an herbaceous plant. The xylem lies on the inside of the bundle and carries water and nutrients from the root to the upper parts of the plant. The phloem lies on the outside of bundle and carries food from the leaves and stem to the root. Between the xylem and phloem is a thin layer of cells called the vascular cambium that may produce phloem to the outside and xylem to the inside. Some stems have thick walled cells that protect the vascular bundles and make the stem tough and sturdy.

Pith: The center of the stem consists of loosely packed cells similar to those found in the cortex. They carry out the same functions as the cortex with the exception of photosynthesis. Since they are inside the stem, the receive no sunlight and therefore can not manufacture food as the cortex can.

The diagram and description above apply to a huge group of garden plants called dicots but there is another significant group of herbaceous annuals and perennials, called monocots, that have essentially the same tissues in their stems but in a different arrangement. Typical monocots are lilies, iris, orchid, tulip, daffodil, and grass; they can be recognized by the parallel veins in their long narrow leaves and their flower parts in multiples of three. The stem of a typical monocot has vascular bundles scattered in cortex tissue instead of arranged in a ring. Since you can’t tell the pith from the cortex it is all known as cortex. In addition, the vascular bundle lacks the cambium between the phloem and xylem but the vascular bundle has a protective layer around it called the bundle sheath. 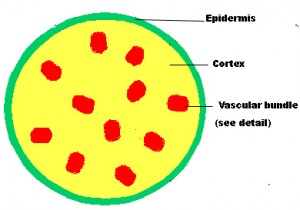 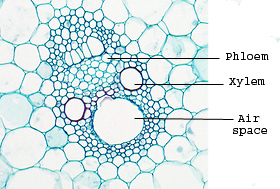 Trees and shrubs are another variation on this theme. Most are dicots with woody stems and follow the dicot pattern with a couple of exceptions. 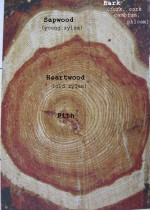 1. The cambium in the vascular bundle produces large quantities of phloem to the outside and xylem to the inside that merge to become concentric rings of tissue in the stem. As the xylem matures it becomes thick walled and very strong; we call it wood. The phloem is weak walled and gets squeezed up against the cortex., so most of a woody stem is xylem. The term sapwood refers to the xylem that is actively carrying water and mineral nutrients from the roots to the leaves. Heartwood is darker-colored; it used to be sapwood but no longer carries water and only serves to give strength to the plant.

2. Some woody plants have a layer of cells under the epidermis called the cork cambium. This tissue produces a tough covering on the stem, called cork, that contributes to the covering we call bark. Actually, bark consists of vascular cambium, phloem, cortex, cork cambium, and cork. 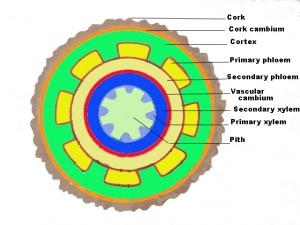 Gymnosperms, like pines, spruces, and firs, is another group of woody plants and follows the pattern of the woody dicots except that they have resin ducts in their xylem and their xylem cells are not as thick walled and tough. This is why dicot trees such as maple and oak are called “hardwoods” and pine and spruce are called ‘softwoods”.

The arrangement and kinds of tissues found in plants is important to gardeners because it can help us understand some of the problems we face growing our plants. The effects of air pollution, herbicides, salt spray, drought, and high winds all relate to stem structure and the effectiveness of the stem in carrying out its role in the life of a plant. Besides, as a homeowner, I like understanding what’s behind terms like heart-wood, softwood, and hardwood.