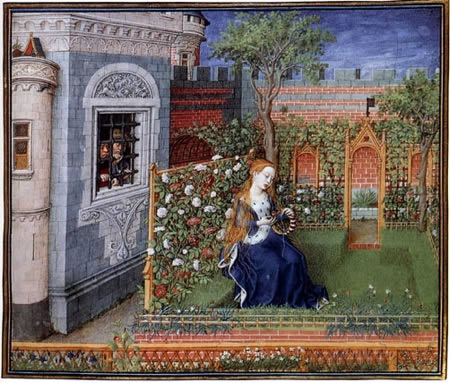 This scene by Barthelemy d’Eyck is  from the manuscript, Teseida, an epic poem written by Giovanni Boccaccio c. 1340-1341.  It shows Emily, the younger sister of the amazon Hippolyta,  sitting in her garden while her would be suitors, Arcita and Palemone, watch her from the window of  their prison cell.  The suitors were captured at the end of the Theban War by Theseus, hero of the poem, and imprisoned in Athens where they fell in love with Emily when they heard  her singing outside their window.

Emily sits in an enclosed castle garden which perhaps is the garden of love that Boccaccio describes in the Teseida. A tall brick and stone defensive wall protect the garden from outside threats.    Emily sits upon a turf bench backed by a light weight wooden structure with a lozenge grid supporting red and white roses.  She appears to be weaving a wreath to wear on her head, a common courtly activity for a woman. 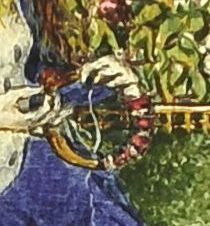 Behind Emily is an arched bower with grapes and beside her are beds of flowers that have been identified as carnations, columbine, and iris. 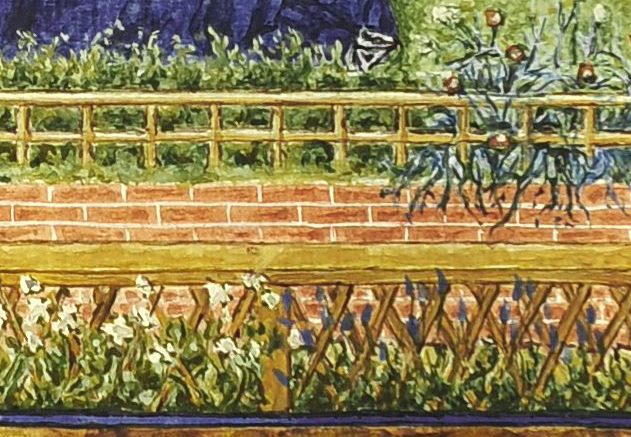 On the other side behind lattice work supporting more roses, an aloe plant grows in a raised  bed. 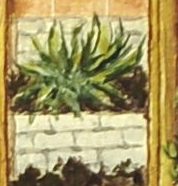 Although Emily’s garden is secular, it recalls the walled garden,  hortus conclusus, that symbolizes the perpetual virginity of Mary.  Emily’s long blond hair and blue dress are often used in portrayals of the Virgin while the rose evokes Christ’s incarnation, the iris Mary’s suffering, and columbine, her relationship to  the Holy Spirit.