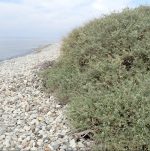 Also known as sea orache, this halophitic evergreen shrub is native to coastal areas of  the Mediterranean Basin, North and East African and the Arabian Peninsula, and is a member of the Amaranthaceae that also includes spinach, beet, and celosia.  It has a deep root, is highly branched, and grows 6-10′ tall.  The silvery white leaves are ovate and up to 1.5″ long.  Dense terminal panciles of small yellowish to green male and female flowers appear on leafless twigs on the same plant in mid summer. The kidney shaped fruits contain brown seeds. Photo Credit Wikimedia Commons

Meditarranean saltbush is thought to be the plant meant by the Hebrew word מַלּ֣וּחַ  and is often translated as mallows because of the similarity of the Hebrew word to the Greek word malache (implying salty), from which the Latin malva and English “mallow” are derived.  It is not related to the plant we ordinary call mallow, Malva sp..  Mediterranean saltbush flourishes in the area around the Dead Sea and is still a source of food. The leaves are described as sour and salty and can be eaten either cooked like spinach or fresh as salad but are considered a poor man’s food.  Twenty one kinds of saltbush are found in the Holy Land and any one of them could be the plant intended but the most likely after A. halimus are  A. dimorphostegia, A. rosea (tumbling saltbush), and A. tataric (tatarian orachea).

Mediterranean saltwort likes full sun and average to lean, dry to medium moist, well-drained soil and can tolerate drought salt, wind, and alkaline soil in USDA Hardiness zones 7-11.   It is now grown as an ornamental hedge plant and for medical uses.

The genus name, Atriplex, is the Greek name for orach, a related plant that can be used as spinach.  The specific epithet, halimus, is from the Greek word  Ἁλιμοῦς the name of a region of ancient Athens known for its sea weed, and refers to the fact that the plant can grow in saline soil.