Plants of the Bible: Atriplex dimorphostegia 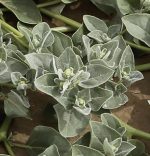 This annual shrub is a member of the Amaranthaceae family that also includes spinach, beet, and celosia.  It is native to western Asia from Arabia to Afghanistan and Tibet where it grows in deserts, dunes, sandy places, and alluvial fans. The decumbent or spreading plants grow 5-16″ tall and are many branched.  The gray-green succulent leaves are .4-1″ long, subsessile, and ovate, deltoid, or cordate.  Inconspicuous male and female  flowers appear in the leaf axils on the same plant in summer. Photo Credit Wikipedia

The Hebrew word מַלּ֣וּחַ  and is often translated as mallows because of the similarity of the Hebrew word to the Greek word malache (implying salty), from which the Latin malva and English “mallow” are derived.  It is not related to the plant we ordinary call mallow, Malva sp.  Most authorities believe that a kind of saltbush, Atriplex, is intended.   Twenty one kinds of saltbush are found in the Holy Land and any one of them could be the plant intended.  Although Atriplex halimus  is the most probably species, other possibilities include  A. dimorphostegia,  A. rosea (tumbling saltbush) and A. tatarica (tatarian orachea).

A. dimorphostegia likes full sun and average, medium moist to dry, well-drained, neutral, acid, or alkaline soil but tolerates lean, and very alkaline and saline soils.  It is not shade tolerant.   The leaves and seeds of the plant are edible; the leaves are eaten as emergency food and the seeds used as a thickener or in bread. Propagation is by seed.

The genus name, Atriplex, is the Greek name for orach, a related plant that can be used as spinach. The specific epithet, dimorphostegia, comes from the Greek words dis meaning twice, morphe meaning shape, and stegon, meaning cover.

Previous post: Butterflies for the Garden and How to Attract Them: Great Spangled Fritillary (Speyeria cybele)