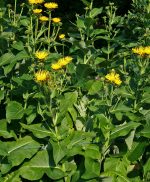 Also called horse-heal, scabwort, and elfwort, and wild sunflower, elecampane is a herbaceous perennial and a member of the aster family, Asteraceae, that also includes daisy, yarrow, and lettuce.  It is native to central and northern Europe and northwest Asia where it grows in damp shady areas. Plants grow 4-6′ tall from a large,  fleshy, spindle shaped rootstock.  The  coarse, woolly stem is deeply furrowed and arises from a rosette of  elliptical to oblong  leaves that have toothed margins and are carried on long stalks and are up to 2′ long. The leaves are up to 2′ long and have bristly upper sides and velvety lower sides.   Stem leaves are pointed, have heart shaped base and are stalkless. The solitary  flower heads  are 3-4″ and have numerous slender yellow ray flowers around a center of disc flowers.  They appear in summer and give rise to brown one seeded fruits (achenes) with a ring of pale reddish hairs.  Plants prefer a moist, well-drained soil with light shade.  They are easily propagated from offshoots or 2″ long root cuttings in fall.  The genus name, Inula, comes from the Latin derivation of the Greek word helenion, referring to Helen of Troy.  It is believed that Helen had a handful of this plant when Paris stole her from her husband.  Another legend says the plant sprung from the Helen’s tears, while a third story suggests that the name refers to the island Helena where the best plants grow.  The specific epithet, helenium, also comes from the Greek word helenion, referring to Helen of Troy. The common name, elecampane, refers to Campania, a region in Italy where the plant grew wild.

Elecampane was well know to ancient Greeks and Romans.  The  poet Horace mentions a delicate sauce made from the root and the use of the plant for curing the effects of dinning too richly.  The ancient Roman naturalist Pliny the Elder recommended the root  for aiding digestion, expelling melancholy, and gaining mirth  and noted that chewing the root helped fasten the teeth.  The ancient physician Galen wrote that the root was “good for the passions of the hucklebones “(siatica) and in the Middle Ages  before the Norman Conquest, the Anglo-Saxons used the plant medicinally, including for farm animals, while monks enjoyed the plant as a cordial. In Renaissance times the English plantsman, Gerard, mentions elecampane for treating  shortness of breath, old cough, cramps, convulsions and snake bites.  To this list  the English herbalist Culpepper adds spleen problems,  wheezing in the lungs, fevers, plague, vision problems, worms in the stomach, spitting blood, gout, pains in the joints, scabs, itch, sores, cankers, and other skin problems.  Both of these last two authors are imitative and full of misinformation can not be trusted.  The colonists may have brought the plant to make medicines to treat their horses as the only problems that elecampane can successfully treat in humans are coughs and other minor respiratory ailments.