I chose the white rose ‘Sombreuil’ for its fragrance and round old fashioned flower and it does not disappoint. It has clamored over the secret garden wall and can be enjoyed as you enter the rose garden or in the secret garden. It always has a touch of blackspot but does not seem to be much affected by it. The dark red “Annapolis Rose” (named because we brought it with us from our home there and don’t know it’s true name) is just beginning its bloom.

The arbor into the rose garden is covered with ‘Autumn Sunset’, another very fragrant rose with a color resembling sherbert. This is one very vigorous climber and we have a hard time keeping it in check.  It will soon look like it has a crewcut that needs trimming. 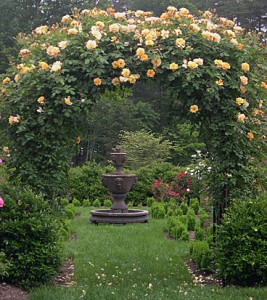 The pale pink rose ‘Awakening’ on the other arbor entrance is also flourishing and covered with bloom. The pretty bell shaped white flowers on the young Styrax trees, just outside the rose garden, add fragrance. 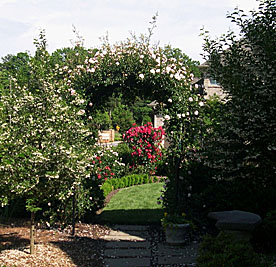 Inside the rose garden several roses are making a grand show. ‘Dortmund’ seems to have settled into its pillar and its red flowered branches are gracefully spilling over the top instead lying sprawled out all over the ground as they did last year before being tucked into its pillar. 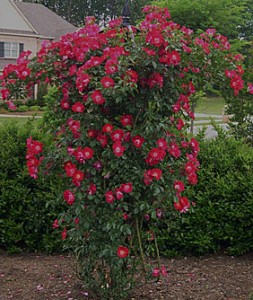 ‘Fred Loads’ with its bright orange flowers stands stiffly in contrast. It is a difficult rose to fit into the garden because of both its color and growth habit but I like it anyway. 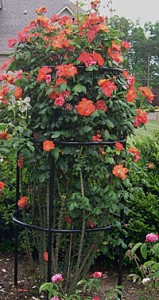 The small flowers of ‘Margo Koster’  echo nearby ‘Fred loads’  with their orange-red tones. 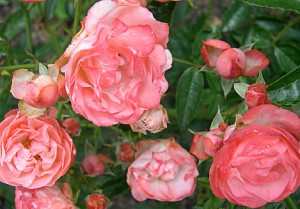 ‘Sally Holms’ repeats the orange tones in its buds which open creamy white. 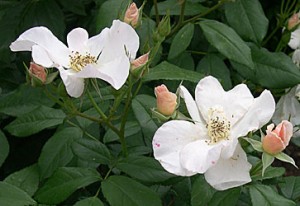 ‘Roberta’ is strutting her stuff right now. This very pale pink rose is spectacular in the spring and fall. It can’t quite get the buds to open when the heat and humidity hit so the beautiful flowers must be enjoyed now. I particular like the very round, cup-like shape of the buds and the full, flat, open flowers.

In the secret garden, off of the master bedroom, the cascading foliage of Hakenachloa aurea echoes the color of the flowers of the Lady’s Mantle (Alchemilla mollis) with its soft mound of blue-gray foliage. 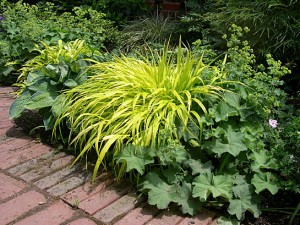 In another part of the secret garden the chartreuse foliage of coralbells (Heuchera sanguinea ‘Key lime Pie’) sets off the yellow flowers of perennial foxglove (Digitalis grandiflora.) 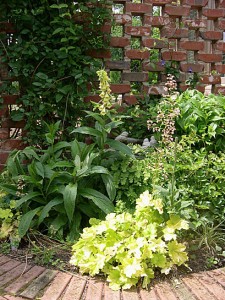 The pansies in the early spring containers are about done but still look nice with the sweet alyssum (Lobularia maritime).

The strawberry colored ivy-leaf geranium (Pelargonium peltatum) cascades over the edge of the black iron urn that forms a focal point on the axis of two paths. 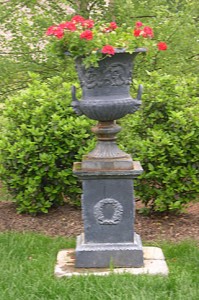 The formal garden is just beginning to bloom. I love the look of the hot pink Cheddar Pinks (Dianthus gratianopolitanus ‘Bath’s Pink’ and ‘Firewitch’) with the gray Artemisia ludoviciana ‘Silver Queen’ and the light pink Oenothera speciosa ‘siskiyou’ with the gray of Lamb’s Ear (Stachys byzantina). Lavendar spiderwort (Tradescantia virginiana, variety unknnown) forms a generous clump near the steel blue wild indigo (Baptisia australis) that adds an architectural elements to the rest of the garden while the plants around it are still small but on the rise. Three large stands of white Siberian iris (Iris sibirica ‘White Swirl’ stand like sentinels in the distance. 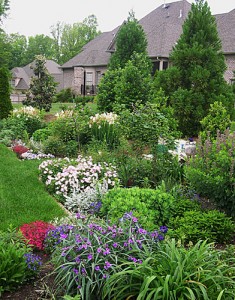 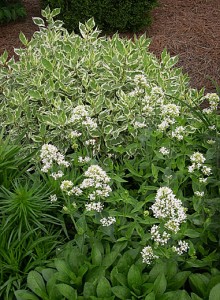 Some yellow and white pansies were able to push their way up through a dense covering of Bishops weed (Aegopodium podagraria ‘Variegatum’), a true thug in my garden. Later in the season the ‘Yellow Fairy’ rose will grow over it and tame its wild and reckless nature just a bit. Until then I will have to continue to pull it out by the handfuls. 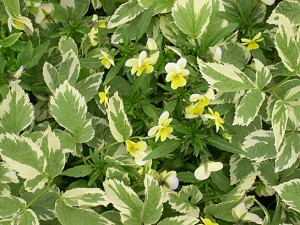 The pot of chives in the herb garden outside the kitchen door gets the prize for being the best looking in that garden as well as being the first one to be harvested. 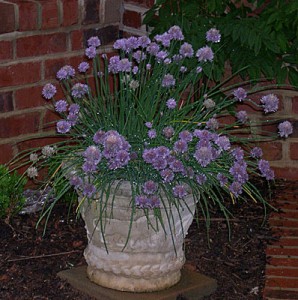 There is lots of work to be done and lots of beautiful plant combinations to develop but it sure is fun to see what is there so far this year.  Life is good!

Next post: How to Select Peppers for the Garden

Previous post: How to Select Cucumbers for the Vegetable Garden